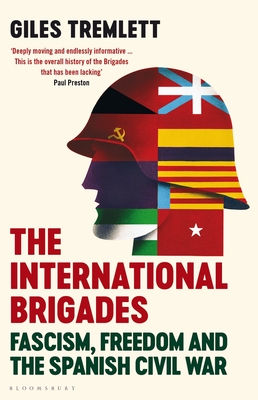 A comprehensive and deeply-researched history of the Spanish Civil War through the lens of the men and women who traveled from around the world to fight Franco's fascism.

The Spanish Civil War was the first armed battle in the fight against fascism, and a rallying cry for a generation. Over 35,000 volunteers from fifty-two countries around the world came to defend democracy against the troops of Franco, Hitler, and Mussolini.

Ill-equipped and disorderly, yet fueled by a shared sense of purpose and potential glory, disparate groups of idealistic young men and women banded together to form a volunteer army of a size and kind unseen since the Crusades, known as the International Brigades. These passionate liberal fighters-from across Europe, China, Africa and the Americas-would join the Republican cause, fighting for over two years on the bloody battlegrounds of Madrid, Jarama and Ebro. Were they heroes or fools? Saints or bloodthirsty adventurers? And what exactly did they achieve?

In this magisterial history, award-winning historian Giles Tremlett tells-for the first time-the story of the Spanish Civil War through all the human drama of an historic mission to halt fascist expansion in Europe. The International Brigades shows just how far ordinary people will go to save democracy against overwhelming odds.

Giles Tremlett is the Guardian's Madrid correspondent. He has lived in, and written about, Spain for the past twenty years.

“Nothing less than magisterial . . . rich details are provided through a combination of first-hand witness and participant accounts, newspaper articles, and secondary sources.” —The Boston Globe

“A remarkable act of scholarship, as well as being captivatingly readable. The first overarching history of the brigades in English . . . [Tremlett] has created a dazzling mosaic of vignettes and sources, of lives lived and lost, of acts of heroism, solidarity, betrayal and futility, that builds to a grand picture of a conflict that drew idealists from across the world. The war left many of them in despair, injured or dead – but also hardened many more in their determination to defeat fascism. This book is as close to a definitive history as we are likely to get.” —The Guardian

“Tremlett's book marks a heroic episode in the history of the left. At a time when real fascists with real guns are patrolling the streets of American cities, and when far-right violence is on the rise in Spain, the sacrifice of the International Brigaders deserves to be remembered. In doing so, Tremlett reminds us that even just wars are dirty and chaotic, breeding grounds of sadism and injustice, and that the selfless often die first.” —Observer

“This evocative study is the first comprehensive history in English of all the 35,000 international volunteers who fought the combined forces of Hitler, Mussolini and Franco in Spain . . . Far more than a civil war, it was Europe's war against Fascism. Giles Tremlett encapsulates its huge stakes perfectly . . .There's no feeling of a heavy read here, such is Tremlett's deft handling of the material and page-turning prose. The story races along, replete with memorable stories and poignant vignettes . . . [A] gripping book.” —Literary Review

“A highly readable, monumental account of the idealism and suffering of the most international army ever assembled since the Crusades.” —New York Journal of Books

“Meticulously researched and engagingly written. Tremlett resurrects an extraordinary cast of characters . . .The Brigaders remain heroes of the left for their internationalism and self-sacrifice. Tremlett has done them proud.” —Economist

"[The International Brigades] offers an implicit reminder of the importance of leftist internationalism as a political force and of its current absence, even as democratic governments around the world, including in Spain, come under attack from neofascist political parties … Tremlett’s exhaustive recounting of the brigades’ shortcomings makes his moral elevation of them somehow more moving." - New York Review of Books

“The bravery and sacrifices of the volunteers from all over the world who fought fascism in Spain keep alive interest in the civil war. Many of the tens of thousands of books about the conflict are about the International Brigades but there has never been one like Giles Tremlett's deeply moving and endlessly informative account. Bursting with memorable quotes and anecdotes, it provides, in lucid and compelling prose, the overall history of the Brigades that has been lacking.” —Paul Preston