The Overachievers: The Secret Lives of Driven Kids (Paperback) 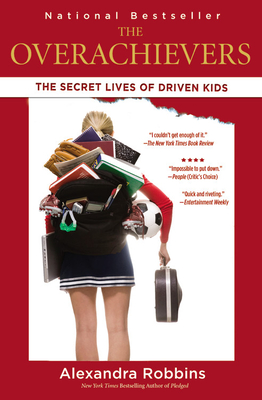 The Overachievers: The Secret Lives of Driven Kids (Paperback)


Usually Ships in 1-5 Days
The bestselling author of Pledged returns with a groundbreaking look at the pressure to achieve faced by America's teens In Pledged, Alexandra Robbins followed four college girls to produce a riveting narrative that read like fiction. Now, in The Overachievers, Robbins uses the same captivating style to explore how our high-stakes educational culture has spiraled out of control. During the year of her ten-year reunion, Robbins goes back to her high school, where she follows heart-tuggingly likeable students including "AP" Frank, who grapples with horrifying parental pressure to succeed; Audrey, whose panicked perfectionism overshadows her life; Sam, who worries his years of overachieving will be wasted if he doesn't attend a name-brand college; Taylor, whose ambition threatens her popular girl status; and The Stealth Overachiever, a mystery junior who flies under the radar. Robbins tackles teen issues such as intense stress, the student and teacher cheating epidemic, sports rage, parental guilt, the black market for study drugs, and a college admissions process so cutthroat that students are driven to suicide and depression because of a B. With a compelling mix of fast-paced narrative and fascinating investigative journalism, The Overachievers aims both to calm the admissions frenzy and to expose its escalating dangers.
Alexandra Robbins, winner of the prestigious 2014 John Bartlow Martin Award for Public Interest Magazine Journalism, is the author of four New York Times bestsellers, including Pledged and The Geeks Shall Inherit the Earth. She has written for the New Yorker, Vanity Fair, New York Times, and other publications, and has appeared on numerous television shows from 60 Minutes to The Colbert Report.