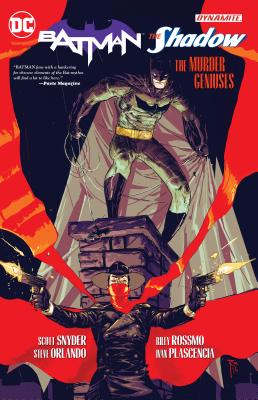 
Email or call for price
As Gotham City's guardian, Batman has investigated nearly every kind of murder--but he's never seen a homicide as strange as this. The worlds of Batman and the legendary vigilante the Shadow collide in this crossover for the ages, co-written by New York Times best-selling author Scott Snyder and now available in paperback!

The death of Lamont Cranston, an Arkham Asylum employee, leads the Dark Knight Detective to an impossible conclusion: the crime was committed by a man also named Lamont Cranston, who died more than 50 years ago--a man better known as the Shadow.

The Shadow is definitely alive and kicking, however, and once Batman picks up his trail he will stop at nothing to bring him to justice. But it soon becomes clear that the hunter and his quarry are both entangled in a much larger web of evil--a conspiracy that threatens everything they have sworn to protect.

Now Batman and the Shadow must put aside their differences to stop a terrifying new foe called the Stag, who has set his sights first on Gotham and then the world. And this merciless monster has a partner of his own: the Clown Prince of Crime himself, the Joker.

Can the Shadow and the Bat stop this unholy alliance? Or will these two brilliant crime-fighters fall victim to the twisted genius of their archnemeses?

Collects Batman Annual #1 and Batman/The Shadow #1-6.
Steve Orlando is a comic book writer who has worked for both DC Comics and Image Comics. He has created Undertow, an underwater epic for Image and has written MIDNIGHTER and is currently writing REBIRTH: SUPERGIRL and MIDNIGHTER AND APOLLO for DC Comics.
“Batman fans with a hankering for obscure elements of the Bat-mythos will find a lot to like here.” —Paste Magazine

“We truly are living in a new golden age of comic book crossovers.” —IGN