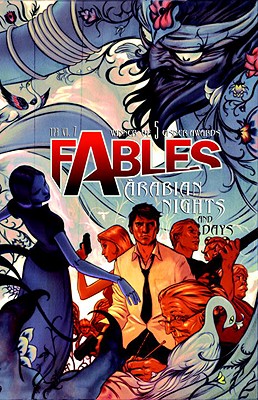 This is book number 7 in the Fables (Paperback) series.

Collecting issues #42-47 of writer Bill Willingham's Eisner Award-winning creation, FABLES: ARABIAN NIGHTS (AND DAYS) opens a new front in the struggle between the Fables and the Adversary as the worlds of the Arabian Fables are invaded — leading to an unprecedented diplomatic mission to Fabletown and a bad case of culture shock! This seventh volume of the popular Vertigo series also includes "The Ballad of Rodney and June," the 2-part story of forbidden love among the Adversary's wooden soldiers, and features stellar Art by Mark Buckingham, Steve Leialoha, Jim Fern, Jimmy Palmiotti and Andrew Pepoy.
Bill Willingham has been writing, and sometimes drawing, comics for more than 20 years. During that time, he's had work published by nearly every comics publisher in the business, and he's created many critically acclaimed comic book series, including Elementals, Coventry, Proposition Players, and of course the seminal Vertigo series Fables, as well as its spin-off series Fairest, Jack of Fables and The Literals. His work has been nominated for many awards, including the Eisner, Harvey, and Ignatz comic industry awards and the International Horror Guild award. He lives somewhere near a good poker room.