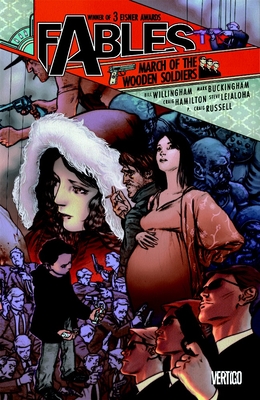 This is book number 4 in the Fables (Paperback) series.

Bill Willingham's runaway hit series FABLES continues its success in this fourth trade paperback, collecting issues #19-21 and #23-27 (issue #22 will appear in a future collection) and featuring the rise of a new threat to Fabletown. Also included is the Prestige Format Special Fables: The Last Castle. When Little Red Riding Hood suddenly walks through the gate between this world and the lost Fable Homelands, she's welcomed as a miraculous survivor by nearly everyone - everyone except her old nemesis, Bigby Wolf, who smells spying and subversion more than survival. But will he be able to prove his case before disaster strikes? And how will it all affect Prince Charming's upstart campaign to become the new mayor of Fabletown?
Bill Willingham has been writing, and sometimes drawing, comics for more than 20 years. During that time, he's had work published by nearly every comics publisher in the business, and he's created many critically acclaimed comic book series, including Elementals, Coventry, Proposition Players, and of course the seminal Vertigo series Fables, as well as its spin-off series Fairest, Jack of Fables and The Literals. His work has been nominated for many awards, including the Eisner, Harvey, and Ignatz comic industry awards and the International Horror Guild award. He lives somewhere near a good poker room.