Riding Outside The Lines: International Incidents and Other Misadventures with the Metal Cowboy (Paperback) 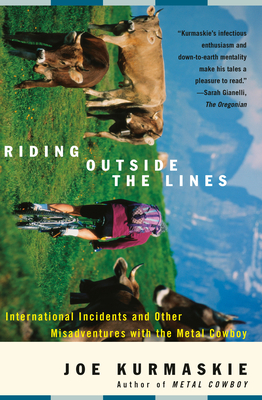 Riding Outside The Lines: International Incidents and Other Misadventures with the Metal Cowboy (Paperback)


Email or call for price
Like a modern-day Don Quixote, Joe Kurmaskie—bike adventurer, writer, and twelve-year-old boy trapped in a man’s body—wanders the world on two wheels, often with hilarious results, in Riding Outside the Lines.

A jaunt through such far-flung locations as Ireland, Australia, Mexico, South America, and beyond, here is a collection of tales woven together with one central theme: the world is a much smaller place when you view it from the seat of a bicycle.

Whether he’s weekending in the buff after accidentally stumbling into a nudist colony wedding, knocking back red wine in tin cans with a gun-toting ex–bounty hunter, combing the countryside in a quest to find the all-girl bagpipe squad he met in his dreams, or playing a rousing game of ice golf on the frozen tundra, Joe Kurmaskie writes of his gonzo global trek in a spirit infused with insight, good humor, and optimism. Riding Outside the Lines encourages travel buffs and armchair explorers alike to get on your bike and see the beauty of our planet and the colorful souls who populate it.
JOE KURMASKIE is the author of Metal Cowboy and has written for Details, the Arizona Star, Oregon Cycling, and Midwest Bike. He is a regular contributor to Bicycling, where his “Ask the Metal Cowboy” column appears. He lives in Portland, Oregon, with his wife and two sons.