Death in the Haymarket: A Story of Chicago, the First Labor Movement and the Bombing that Divided Gilded Age America (Paperback) 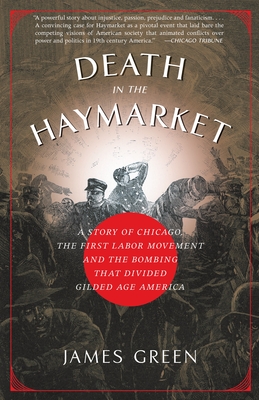 Death in the Haymarket: A Story of Chicago, the First Labor Movement and the Bombing that Divided Gilded Age America (Paperback)


Email or call for price
On May 4, 1886, a bomb exploded at a Chicago labor rally, wounding dozens of policemen, seven of whom eventually died. A wave of mass hysteria swept the country, leading to a sensational trial, that culminated in four controversial executions, and dealt a blow to the labor movement from which it would take decades to recover. Historian James Green recounts the rise of the first great labor movement in the wake of the Civil War and brings to life an epic twenty-year struggle for the eight-hour workday. Blending a gripping narrative, outsized characters and a panoramic portrait of a major social movement, Death in the Haymarket is an important addition to the history of American capitalism and a moving story about the class tensions at the heart of Gilded Age America.
James Green is a professor of history at the University of Massachusetts Boston. He grew up outside of Chicago and now lives with his family in Somerville, Massachusetts.
“Definitive. . . . Green’s dramatic narrative tells a powerful story about injustice, passion, prejudice and fanaticism.” —The Chicago Tribune“Though a number of prominent historians have written about the Haymarket Affair, no one has told the story more thoroughly, incisively and elegantly than Green. . . . He has reconstructed both the context and the events of the Haymarket tragedy with the fine hand of a novelist. The book is rich in plot development and thick characterization, and its interpretations and drama leave the reader both informed and drained.”—The San Diego Union-Tribune“Absorbing. . . .Green . . .brings this tale to vivid life [and] does a wonderful job of delineating the cross currents of labor, capital, politics, and terrorism. . . fascinating and deeply American.”—The Boston Globe“It tells the tale with extraordinary grace. Its simplicity of expression carries an understated dramatic charge that stays with you long after finishing.”—The Nation