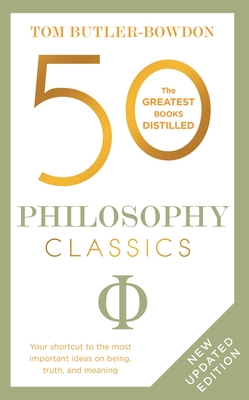 
Email or call for price
For over 2000 years, philosophy has been our best guide to the experience of being human, and the true nature of reality.

This is the thinking person's guide to a uniquely powerful tool for opening our minds and helping us view the world. It synthesises the 50 greatest books ever written, distilling hundreds of ideas from across the centuries with insightful commentary, key quotes and biographical information on the authors.

The revised edition will:
· include 7 new contemporary or timely classics such as Judith Butler's Gender Trouble, Michael Sandel's The Tyranny of Merit, Isaiah Berlin's The Hedgehog and the Fox and Mary Midgely's Myths We Live By.
· include a reader code to access a free pack of downloadable bonus material
· have a revised introduction to reflect on the current relevance of philosophy today with topical themes to have emerged in the 9 years since the last edition was written.
· have some of the less relevant titles removed

"50 Philosophy Classics is an impressively wide-ranging compendium of nutshell clarity. It strikes just the right balance between contextual analysis, and breezy illustrative anecdote."
Dr Phil Oliver, Department of Philosophy, Middle Tennessee State University, USA
Tom Butler-Bowdon is recognized as an expert on personal development literature. His 50 Classics series has been hailed as the definitive guide to the literature of possibility, and has won numerous awards including the Benjamin Franklin Self-Help Award and Foreword Magazine's Book of the Year Award. A graduate of the London School of Economics and the University of Sydney, he lives and works in both the Oxford, UK and Australia. www.butler-bowdon.com