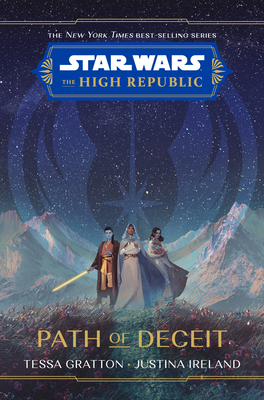 
Usually Ships in 1-5 Days
Set in the world of the High Republic, 150 years before the storytelling of Phase I, an era of change brings new hopes and possibilities . . . but also new dangers.

The Outer Rim planet Dalna has become the focus of a Jedi investigation into a stolen Force artifact, and Zallah Macri and her Padawan, Kevmo Zink, arrive on the pastoral world to follow up on a possible connection to a Dalnan missionary group called the Path of the Open Hand. Members of the Path believe that the Force must be free and should not be used by anyone, not even the Jedi. One such believer is Marda Ro, a young woman who dreams of leaving Dalna to spread word of the Path throughout the galaxy.

When Marda and Kevmo meet, their connection is instantaneous and electric—until Marda discovers Kevmo is a Jedi. But Kevmo is so kind and eager to learn more about the Path, that she hopes she can convince him of the rightness of her beliefs. What Marda doesn’t realize is that the leader of the Path, a charismatic woman known only as the Mother, has an agenda of her own, and it is one that can never coexist peacefully with the Jedi.

In order to follow her faith, Marda may have to choose to become her new friend’s worst enemy. . . .

Don't miss these other adventures set in the era of the High Republic!


Justina Ireland enjoys dark chocolate, dark humor, and is not too proud to admit that she’s still afraid of the dark. She is the author of Dread Nation (Balzer + Bray/HarperCollins), a New York Times bestseller as well as the sequel Deathless Divide. Her earlier works include the fantasy young adult novels Vengeance Bound and Promise of Shadows (both Simon and Schuster). Justina also writes for the Star Wars franchise, including the books Lando’s Luck, Spark of the Resistance, and the upcoming A Test of Courage, part of the High Republic publishing initiative. She is the former co-editor in chief of FIYAH Literary Magazine of Black Speculative Fiction, for which she won a World Fantasy Award. She holds a BA from Armstrong Atlantic University and an MFA from Hamline University.

Tessa Gratton is the author of adult and YA SFF novels and short stories that have been translated into twenty-two languages, nominated twice for the Otherwise Award, and several have been Junior Library Guild Selections. Her most recent novels are the dark queer fairy tales Strange Grace and Night Shine, and queer the Shakespeare retelling Lady Hotspur. Her upcoming work includes the YA fantasy Chaos and Flame (2023), and novels of Star Wars: The High Republic. Though she has lived all over the world, she currently resides at the edge of the Kansas prairie with her wife. Queer, nonbinary, she/any.
PRAISE FOR THE HIGH REPUBLIC: OUT OF THE SHADOWS

"If you're looking for someone who can spin a yarn that makes you feel something inside your guts, makes your heart grow a size or two, and makes your arms bump with little gooses, in my opinion, there's only one answer Justina Ireland...the author of the best book in the first wave of...The High Republic...is back with the best book in wave two."—Cinelinx

PRAISE FOR THE HIGH REPUBLIC: OUT OF THE SHADOWS

"I adored Out of the Shadows...a shining example of how well an ensemble cast works."—Star Wars News Net

PRAISE FOR THE HIGH REPUBLIC: OUT OF THE SHADOWS

“Containing a dizzying number of overarching storylines and characters, this latest installment set in the High Republic era nonetheless excels…Per usual, Ireland’s firm grasp of this universe keeps it all from running amok. An essential tome for die-hard Star Wars fans, although others will find much to enjoy.”—Kirkus Reviews