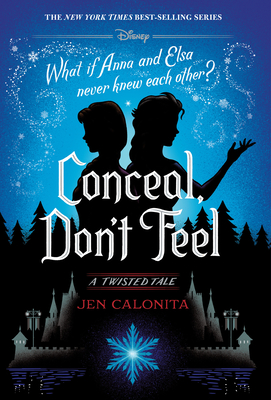 The 7th installment in the New York Times best-selling A TWISTED TALE series asks: What if Anna and Elsa never knew each other?

As the future Queen of Arendelle, Princess Elsa’s life is full of expectation and responsibility—not to mention, questions. What type of ruler will she be? When will she have to pick a suitor? And why has she always harbored the feeling that some critical piece of herself is missing?

Following the unexpected death of her parents, Elsa is forced to answer those questions sooner than she’d hoped, becoming the sole ruler of her kingdom and growing lonelier than ever. But when mysterious powers begin to reveal themselves, Elsa starts to remember fragments of her childhood that seem to have been erased—pieces that include a very familiar-looking girl. Determined to fill the void she has always felt, Elsa must take a harrowing journey across her icy kingdom to undo a terrible curse . . . and find the missing Princess of Arendelle.

For more twisted adventures, try the other books in the A TWISTED TALE series:


Jen Calonita is the author of the award-winning Secrets of My Hollywood Life and Fairy Tale Reform School series. She lives in New York with her husband, two boys, and two chihuahuas named Captain Jack Sparrow and Ben Kenobi. A huge Disney fan, Jen dreams of moving the whole family into Cinderella's castle at Walt Disney World. Visit her online at: www.jencalonitaonline.com and Twitter @jencalonita.