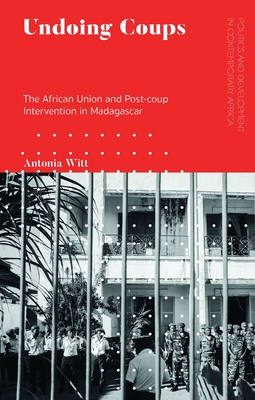 Since the beginnings of independence, a number of African nations have been plagued by repeated coup d' tats. Within the African Union (AU), there has been a concerted effort to break this cycle through the official adoption of an 'anti-coup norm', by which the AU is mandated to suspend a member state and restore constitutional order following a coup. Supporters of this stance see it as strengthening democracy in Africa, while critics argue that it has served to prop up existing regimes. But there has been little analysis of what the AU's attempts to 'restore constitutional order' have meant for individual African states.

In this book, Antonia Witt looks at the legacy of the AU's intervention in Madagascar following the 2009 'Malagasy crisis', one of the increasingly relevant yet under-researched cases of non-Western intervention in Africa. The book looks at the ways in which international intervention reconfigured the political order in Madagascar, how it facilitated the power struggle within the Madagascan elite and prevented more profound political change. It also considers what the example set by the Madagascan intervention means for the wider international order in Africa and the powers attributed to African international actors such as the AU.
Antonia Witt is a Senior Researcher at the Peace Research Institute Frankfurt (PRIF), Germany. She has a background in International Relations, African Studies, and Peace and Conflict Research. Her main research interests are: international and (African) regional organizations, authority and legitimacy in the international realm, and societal effects of interventions in Africa.