My Character Wouldn't Do That: Acting, Cognitive Science and the Optimal Performance Brain (Hardcover) 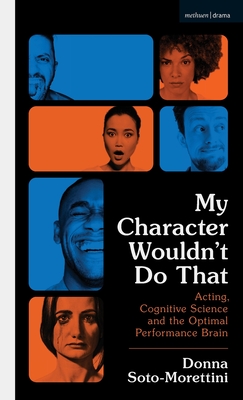 My Character Wouldn't Do That: Acting, Cognitive Science and the Optimal Performance Brain (Hardcover)


Usually Ships in 1-5 Days
Starting from the idea that the main hindrance to a great acting performance is self-consciousness on the part of the performer, My Character Wouldn't do That examines the ways in which some of our traditional and contemporary approaches to acting put us into a 'mind space' that can encourage self-consciousness. Examining evidence from a range of contemporary cognitive sciences, the book approaches acting and actor training in an entirely different way.

Based on the latest research into brain activity and human behaviour, the book covers areas that standard acting texts do (character, emotion, memory, imagination, making active choices) but reconceives each of these elements through the lens of that contemporary research.

The book is the first to look closely at what contemporary research tells us about:
- personality/character and how environment shapes us
- how memory works and how actors can work with (rather than against) their memory in preparing for performance
- why actors must use different kinds of brain states and imagination in the various stages of preparation, rehearsal, and performance
- how actors can frame active choices in a way that refocuses the source of thought and action
- why actors should distinguish the stages of preparation and the kinds of thinking / imagination that works at each stage.
Donna Soto-Morettini has served as Director of Drama for the Royal Conservatoire of Scotland, Head of Acting and Dance for Liverpool Institute for Performing Arts, and Head of Acting at the Royal Central School of Speech and Drama, London, UK. She has worked as casting director and performance coach for Andrew Lloyd Webber's television shows, as casting director for The Voice and performance coach for ITV's Popstar to Opera Star. Her books include Mastering the Audition: How to Perform Under Pressure (2012), Popular Singing and Style (2014), and Mastering the Shakespeare Audition (2016) and The Philosophical Actor (2010)