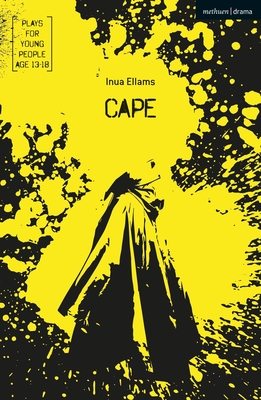 It's a simple idea, really. 1. Wear a uniform; 2. Protect who you love, what you care about; 3. Let nothing get in your way.

Someone mugged Bruce's mum and he is not having it. The shock is still visible in her trembling fingers, rippling out across the calm waters of their lives. He grabs his hoodie, his uniform, his cape and goes out to find the culprit. Smithy wants everyone to stay inside, Uhuru wants everyone out. Tanya thinks it's boyish fun and games until, very suddenly, it isn't. Inua Ellams's play questions the boundaries between our right to self-defense and taking the law into our own hands. Told with five roles spanning from young people to adults, it deals with themes that young people face today: the role of boundaries and what happens when someone 'crosses the line'; fear and the use of self-defense; and examining different perspectives on a situation. Originally commissioned by Synergy Theatre Project Cape premiered at London's Unicorn Theatre in 2013 and went on to tour schools, prisons and a young offender institution. This new edition, published within Methuen Drama's Plays For Young People series features notes for teachers and exercises for students for practical use in the classroom.
Inua Ellams: Born in Nigeria in 1984, Inua is an internationally touring poet, playwright, performer, graphic artist & designer. He is an ambassador for the Ministry of Stories and has published four books of poetry: 'Candy Coated Unicorns and Converse All Stars', 'Thirteen Fairy Negro Tales' 'The Wire-Headed Heathen' and '#Afterhours'. His first play The 14th Tale was awarded a Fringe First at the Edinburgh International Theatre Festival and his fourth Barber Shop Chronicles sold out its run at England's National Theatre. He is currently touring 'An Evening With An Immigrant' and working on The Half God of Rainfall - a new play in verse. In graphic art & design, online and in print, he tries to mix the old with the new, juxtaposing texture and pigment with flat shades of colour and vector images. He lives and works from London, where he founded the Midnight Run, a nocturnal urban excursion. He is a Fellow of the Royal Society of Literature.