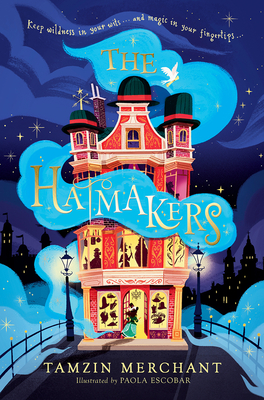 An enchanting fantasy adventure about the importance of bravery, resourcefulness, and following your heart from a debut celebrity author.

The most important rule to follow when you hunt for hat ingredients is this: keep wildness in your wits and magic in your fingertips.

In Cordelia’s London, magic is real and is woven into objects created by the five Maker families: the Hatmakers, the Bootmakers, the Watchmakers, the Cloakmakers, and the Glovemakers. Growing up in her father Prospero’s footsteps, eleven-year-old Cordelia Hatmaker has learned the family’s ancient skills and secrets so she can one day make her own enchanted hats.

When Prospero and his ship are lost at sea during an important ingredient expedition, her grief-stricken aunt and uncle must turn their attention toward fulfilling a decree to create a Peace Hat for the king. But Cordelia refuses to accept that her father is gone for good and desperately begins making plans to find him. Then, the Peace Hat is stolen—along with the Peace Boots, Watch, Cloak, and Gloves—and Cordelia realizes that there is a more menacing plot against the Makers’ Guild, and that Prospero Hatmaker’s disappearance may be connected. Cordelia must uncover the truth about who is behind the thefts if she is to save the Makers and find out what really happened to her father.

Tamzin Merchant is known for her roles in Pride & Prejudice, The Tudors, Salem, and Carnival Row. She is also the author of The Hatmakers, which Kirkus Reviews called “a swashbuckling romp for lovers of history and magic.” She lives in England.

A swashbuckling romp for lovers of history and magic.
— Kirkus Reviews

An engaging ode to the bonds of family and friendship, the power of teamwork, and the magic that we all have inside ourselves.
— Booklist