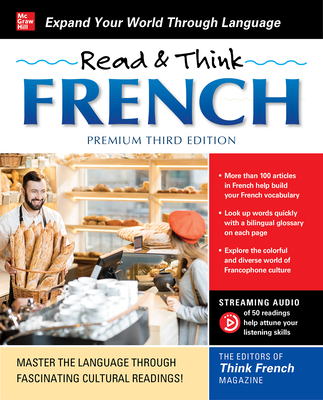 By The Editors of Think French! Magazine


Usually Ships in 1-5 Days
Your first-class ticket to building better French language skills--and appreciating the diversity of Francophone culture From the bestselling Read & Think series, this fully illustrated premium third edition of Read & Think French brings the French language to life In addition to introducing, developing, and growing key vocabulary, this book gives you an insider's look at the exciting diversity of life and culture the French-speaking world-- from etiquette at the French table to the comedians of Quebec to the gastronomic flavors of the French West Indies. Including more than 100 engaging articles written by native French speakers, each one provides a bilingual glossary on the same page, allowing you to learn without stopping to look up new or unfamiliar words. Each chapter contains several exercises to reinforce comprehension. This premium edition features streaming audio recordings of 35 readings (more than 2 hours), supported by the McGraw Hill Language Lab app. Read & Think French, Premium Third Edition features:

The editors of Think French! magazine are experts in French-language instruction and culture. The authors of the articles are all native French speakers, and many also teach French to secondary- and college-level students.