Google It: A History of Google (Paperback) 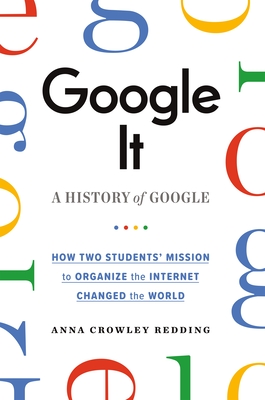 Google It: A History of Google (Paperback)

In Google It, award-winning investigative reporter Anna Crowley Redding shares an inspiring story of innovation, personal and intellectual bravery, and most importantly, of shooting for the moon in order to change the world.

Larry Page and Sergey Brin started out as two Stanford college students with a wild idea: They were going to organize the world's information. From that one deceptively simple goal, they created one of the most influential and innovative companies in the world.

The word “google” has even entered our vocabulary as a verb. Now, find out the true history of Google—from its humble beginnings as a thesis project made out of “borrowed” hardware and discount toys through its revolution of the world's relationship with technology to a brief glimpse of where they might take us next.

Anna Crowley Redding is the author of Google It, Elon Musk: A Mission to Save the World, and Black Hole Chasers. The recipient of multiple Edward R. Murrow and Associated Press awards, Crowley Redding uses her Emmy award-winning investigative reporting skills to dig into compelling topics that are shaping our world. Her works have been translated into multiple languages, garnered national news coverage, and been recognized by the National Association of Science Teachers for excellence. Crowley Redding lives outside of Portland, Maine with her family.

"Investigative journalist Redding does an admirable job of chronicling Larry and Sergey’s amazing successes and will inspire young people to follow in their ingenious footsteps. It’s more comprehensive than other books for young readers about Google’s founders, with energetically written short chapters, interesting facts, graphics, and photos" —Booklist, starred review

"This readable and breezy history of the tech behemoth [is] An appealing and timely look at a universally relevant subject and a good fit for STEAM-related reading lists." —School Library Journal

"This chronological history of the first two decades of Google is attractively packaged to appeal to a teen audience. ... Humorous accounts of Google's unpretentious beginnings as a student project, and its early years as a bare-bones startup in a friend's garage will intrigue teens who dream of growing their own projects into software and devices used by millions." —VOYA