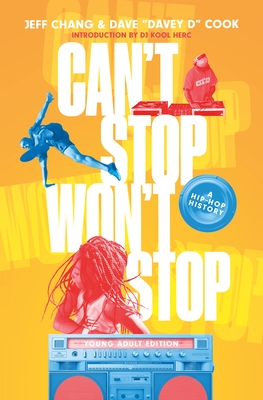 From award-winning author Jeff Chang, Can't Stop Won't Stop is the story of hip-hop, a generation-defining movement and the music that transformed American politics and culture forever.

Hip hop is one of the most dominant and influential cultures in America, giving new voice to the younger generation. It defines a generation's worldview. Exploring hip hop's beginnings up to the present day, Jeff Chang and Dave "Davey D" Cook provide a provocative look into the new world that the hip hop generation has created.

Based on original interviews with DJs, b-boys, rappers, activists, and gang members, with unforgettable portraits of many of hip hop's forebears, founders, mavericks, and present day icons, this book chronicles the epic events, ideas and the music that marked the hip hop generation's rise.

Jeff Chang has been a hip-hop journalist for more than a decade and has written for The San Francisco Chronicle, The Village Voice, Vibe, The Nation, URB, Rap Pages, Spin, and Mother Jones. He is the author of several books, including the American Book Award-winning Can't Stop Won't Stop: A History of the Hip-Hop Generation. He was a founding editor of Colorlines Magazine, senior editor at Russell Simmons’s 360hiphop.com, and cofounder of the influential hip-hip label SoleSides, now Quannum Projects. He lives in California.

"This engrossing, engaging account bills itself as a history of hip-hop, but it's so much more." - starred Booklist Review

"Readers can feel the seeds of Chang’s cultural organizing within the storytelling of this tour de force while Cook brings his decades of experience as a pioneering hip-hop journalist to give new color to this edition." - starred Kirkus Review