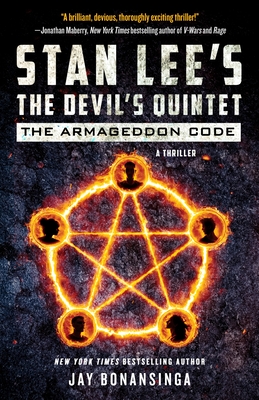 In Stan Lee's The Devil's Quintet: The Armageddon Code, the world-famous architect of the Marvel Universe, teams up with New York Times bestselling author Jay Bonansinga to unleash a bold new superhero series on the world.

A five-person special ops unit, composed of a diverse assortment of former Navy SEALS from all walks of life, are responding to a terrorist threat deep in the Caucasus Mountains when their mission goes south in a big way. Facing certain death and torture, they’re unexpectedly offered a Faustian bargain by the Devil himself, who grants them unearthly powers in order to send evildoers to Hell on his fiendish behalf.

But “The Devil’s Quintet” do things their own way, fighting to protect America and the world, while trying their best not to let their hellish new abilities corrupt them beyond redemption . . .

JAY BONANSINGA is a critically acclaimed horror novelist whose works include Perfect Victim, Shattered, Twisted, and Frozen. His debut novel, The Black Mariah, was a finalist for a Bram Stoker award.

STAN LEE was a successful writer and editor for nearly eighty years. Lee was known to the world as the man whose superheroes propelled Marvel to its preeminent position in the entertainment industry. His co-creations included Spider-Man™, The Avengers™, Black Panther™, X-Men™, Iron Man™, The Incredible Hulk™, The Fantastic Four™, and hundreds of others. Lee continued to serve as Marvel Entertainment’s Chairman Emeritus until his death in 2018.

“A fast and wildly entertaining mix of military derring-do, demonology, romance, crackling wit, and verbal dexterity that will keep readers panting for the next installment.”
—Gary Braver, award-winning and bestselling author of Tunnel Vision and co-author of Choose Me

“A twisted, high-powered cross between SEAL TEAM and DOCTOR FAUSTUS. A rag tag group of soldiers winds up forging a deal with the devil and literally ends up saving the world. Memorable heroes and a gripping, hard-pulsing writing style elevates one of the final works of Stan Lee for an eager audience.”
—Peter David, New York Times bestselling author