Tender Is the Bite: A Chet & Bernie Mystery (Paperback) 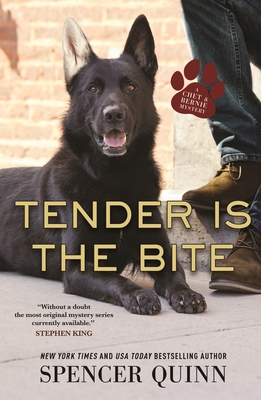 Tender Is the Bite: A Chet & Bernie Mystery (Paperback)

This is book number 11 in the A Chet & Bernie Mystery series.

Spencer Quinn's Tender Is the Bite is a brand new adventure in the New York Times and USA Today bestselling series that Stephen King calls "without a doubt the most original mystery series currently available."

Chet and Bernie are contacted by a terribly scared young woman who seems to want their help. Before she can even tell them her name, she flees in panic. But in that brief meeting Chet sniffs out an important secret about her, a secret at the heart of the mystery he and Bernie set out to solve.

It's a case with no client and no crime and yet great danger, with the duo facing a powerful politician who has a lot to lose. Their only hope lies with a ferret named Griffie who adores Bernie. Is there room for a ferret in the Chet and Bernie relationship? That's the challenge Chet faces, the biggest of his career. Hanging in the balance are the lives of two mistreated young women and the future of the whole state.

“I have been a Chet and Bernie fan from the start. Chet is a wonderful narrator—top dog, you could say—but he never descends to cuteness, and Bernie is as tough a PI as Spade or Marlowe, a man as quick with his .38 as he is with a Slim Jim for his sidekick. I’m already jonesing for the next one.” —Stephen King

“Delightful…dog lovers won’t want to miss this one.” —Publishers Weekly on Heart of Barkness

“Would that we all were as infallible in our dogs’ eyes as Bernie is in Chet’s.” —Susan Wilson, New York Times bestselling author of The Dog I Loved

“Cleverly plotted…Chet is a source of wisdom and innate doggie joie de vivre, making this a real pleasure for anyone who has ever looked into a dog’s eyes and asked: who’s a good boy?” —Publishers Weekly