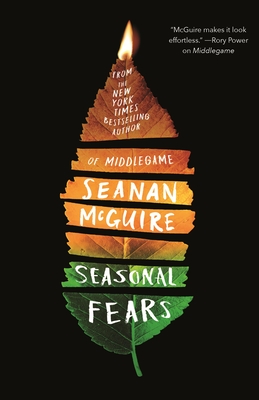 This is book number 2 in the Alchemical Journeys series.

The king of winter and the queen of summer are dead. The fight for their crowns begins!

Melanie has a destiny, though it isn’t the one everyone assumes it to be. She’s delicate; she’s fragile; she’s dying. Now, truly, is the winter of her soul.

Harry doesn’t want to believe in destiny, because that means accepting the loss of the one person who gives his life meaning, who brings summer to his world.

So, when a new road is laid out in front of them—a road that will lead through untold dangers toward a possible lifetime together—walking down it seems to be the only option.

But others are following behind, with violence in their hearts.

It looks like Destiny has a plan for them, after all….

"One must maintain a little bit of summer even in the middle of winter." —Thoreau

SEANAN McGUIRE is the author of the Hugo, Nebula, Alex and Locus Award-winning Wayward Children series, the October Daye series, the InCryptid series, and other works. She also writes darker fiction as Mira Grant. Seanan lives in Seattle with her cats, a vast collection of creepy dolls, horror movies, and sufficient books to qualify her as a fire hazard. She won the 2010 John W. Campbell Award for Best New Writer, and in 2013 became the first person to appear five times on the same Hugo ballot. In 2022 she managed the same feat, again!

A Goodreads Most Anticipated Summer Read!