The Grammarians: A Novel (Paperback) 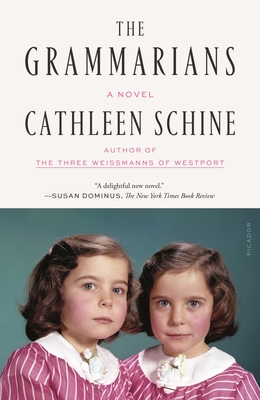 A literal war of words erupts between two twin sisters over their shared obsession with grammar and their father's copy of the Webster's Dictionary.

An enchanting, comic love letter to sibling rivalry and the English language.

From the author compared to Nora Ephron and Nancy Mitford, not to mention Jane Austen, comes a new novel celebrating the beauty, mischief, and occasional treachery of language.

The Grammarians are Laurel and Daphne Wolfe, identical, inseparable redheaded twins who share an obsession with words. They speak a secret “twin” tongue of their own as toddlers; as adults making their way in 1980s Manhattan, their verbal infatuation continues, but this love, which has always bound them together, begins instead to push them apart. Daphne, copy editor and grammar columnist, devotes herself to preserving the dignity and elegance of Standard English. Laurel, who gives up teaching kindergarten to write poetry, is drawn, instead, to the polymorphous, chameleon nature of the written and spoken word. Their fraying twinship finally shreds completely when the sisters go to war, absurdly but passionately, over custody of their most prized family heirloom: Merriam Webster’s New International Dictionary, Second Edition.

Cathleen Schine has written a playful and joyful celebration of the interplay of language and life. A dazzling comedy of sisterly and linguistic manners, a revelation of the delights and stresses of intimacy, The Grammarians is the work of one of our great comic novelists at her very best.

"Schine's warmth and wisdom about how families work and don't work are as reliable as her wry humor, and we often get both together . . . This impossibly endearing and clever novel sets off a depth charge of emotion and meaning." —Kirkus Reviews (starred review)

"Schine's sparkling latest [is] both a fizzy exploration of the difficulties of separating from one's closest ally and a quirky meditation on the limits of language for understanding the world." — Publishers Weekly

"Captivating . . . written with the tender precision and clarity of a painting by Vermeer . . . [a] wry and elegant novel." —Ann Levin, Associated Press

"A delightful new novel . . . Schine takes her readers on deep philosophical dives but resurfaces with craft and humor; her tone is amused and amusing." —Susan Dominus, The New York Times Book Review

“The mother of the beguilingly unusual twins whose lives unfold in this sublime comic novel could not adore them more than I do. A singular delight for anyone who has ever marveled at the quirks and beauties and frustrations of English grammar, and a fascinating portrait of the passions and dramas of fierce familial love.” —Sigrid Nunez, National Book Award–winning author of The Friend

"This tale of twins who "elbow each other out of the way in the giant womb of the world" is smart, buoyant and bookish — in the best sense of the word." —Heller McAlpin, NPR

"Cathleen Schine’s new novel, The Grammarians, is a rich study of the factions that attempt to define how language should be used."—Lauren Leibowitz, The New Yorker

"Cathleen Schine’s marvelous new novel is a book besotted with words . . . But you don’t need to be a writer or editor to fall under Schine’s spell. The Grammarians is about family, the ebb and flow of our deep and tenuous connections to the people who make us who we are." —Connie Ogle, Star Tribune

“One might well expect a novel about dictionary-obsessed identical twins to throw off one clever, coruscating observation or bit of wordplay after another, like a kind of literary Catherine wheel. And The Grammarians certainly does that, and does it wonderfully well. Yet as I read on I found myself not only fascinated and amused—because, I must underline, it’s often hugely funny—but deeply moved, because this is also a novel of great and often aching feeling.” —Benjamin Dreyer, New York Times–bestselling author of Dreyer’s English

"Schine’s latest page-turning charmer is a warm, witty, and weird ode to sisterhood and language."—Entertainment Weekly

“This is an utterly charming book, and yet more than that. It is a book of real people and their relationship—both to language and to each other. Fresh as a white sheet of paper, it is clean and lovely; an absolutely delightful read.” —Elizabeth Strout, Pulitzer Prize–winning author