Endeavour: The Ship That Changed the World (Paperback) 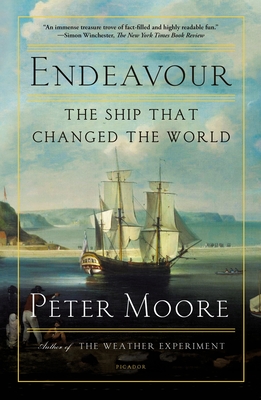 A Sunday Times (U.K.) Best Book of 2018 and Winner of the Mary Soames Award for History

The Enlightenment was an age of endeavors, with Britain consumed by the impulse for grand projects undertaken at speed. Endeavour was also the name given to a collier bought by the Royal Navy in 1768. It was a commonplace coal-carrying vessel that no one could have guessed would go on to become the most significant ship in the chronicle of British exploration.

The first history of its kind, Peter Moore’s Endeavour: The Ship That Changed the World is a revealing and comprehensive account of the storied ship’s role in shaping the Western world. Endeavour famously carried James Cook on his first major voyage, charting for the first time New Zealand and the eastern coast of Australia. Yet it was a ship with many lives: During the battles for control of New York in 1776, she witnessed the bloody birth of the republic. As well as carrying botanists, a Polynesian priest, and the remains of the first kangaroo to arrive in Britain, she transported Newcastle coal and Hessian soldiers. NASA ultimately named a space shuttle in her honor. But to others she would be a toxic symbol of imperialism.

Through careful research, Moore tells the story of one of history’s most important sailing ships, and in turn shines new light on the ambition and consequences of the Age of Enlightenment.

Peter Moore is an English writer, historian and lecturer. He is the author of Endeavour (2018) and The Weather Experiment (2015), which were both Sunday Times bestsellers in the United Kingdom. The Weather Experiment was also chosen as one of the New York Times 100 Notable Books of 2015. He teaches at the University of Oxford, has lectured internationally on eighteenth century history, and hosts a history podcast called Travels Through Time.

“[A] fantastically detailed story . . . a joy of a biography, offering up a blizzard of maritime and political fascinations . . . Moore has written a book that makes the case for [Endeavour] both compelling and irrefutable—and offers up besides an immense treasure trove of fact-filled and highly readable fun.” --Simon Winchester, The New York Times Book Review

"[Moore] draws the reader in with lively prose . . . an engaging, well-researched narrative." --A. Roger Ekirch, The Wall Street Journal

"[An] immersive account of [Endeavour's] life, from acorn to ending." " --The Economist

"Enlightening . . . Moore goes well beyond simple history or a mere tracking of the Endeavour's exploits. Though the minutiae may seem daunting at first, readers should stick with it, as the narrative transforms into a page-turning, breathtaking adventure story for the ages . . . History at its most exciting and revealing." --Kirkus (starred review)

"In recounting the history of the Endeavour, Moore illuminates the improbable life of a humble collier . . . In learning about one boat’s world-straddling feats, readers also learn about the impetuous spirit that transformed society during the decades she sailed . . . With an acute eye, Moore limns the conflicting human impulses in the first episodes of this epoch-making drama. Maritime history that opens onto much more." --Booklist (starred review)

"Endeavour is a dazzling combination of science and adventure, lyrically evocative descriptions of lush tropical landscapes and salt-stung seascapes, and a portrait of an age of 'magnificent geniality' . . . Endeavour is an absolute joy from start to finish, and surely my history book of the year." —Christopher Hart, Sunday Times (U.K.)

"Endeavour is an extraordinary book about an unlikely ship that defined an age . . . The book reminded me of one of those opulent 18th-century feasts enjoyed by King George ­– endless exotic dishes all delivered with exquisite style. Like the age it recounts, it is a book of energy, creativity and self-confidence." —Gerard DeGroot, The Times (U.K.)

"Moore’s richly detailed book is an engrossing love letter to a word, an attitude and a ship: it is an endeavour that honours Endeavour, without denying the death and destruction that followed in her wake." —Ruth Scurr, The Guardian

"Endeavour is a deeply satisfying book. It represents an intelligent, diverse, fresh and challenging approach to writing the history of exploration. Paying homage to the remarkable lives of a single vessel, Peter Moore also gives the Endeavour a new lease of life long after its sinking." —Robert Mayhew, Literary Review