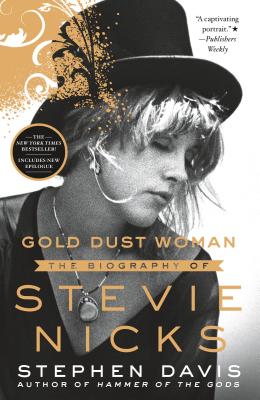 “All you ever wanted to know about Fleetwood Mac’s mesmerizing frontwoman.” - People Magazine

"Davis is astute and respectful...adept in his literary analysis." - The New York Times Book Review

Stevie Nicks is a legend of rock, but her energy and magnetism sparked new interest in this icon. She's one of the most glamorous creatures rock has known, and the rare woman who's a real rock ‘n' roller.

Gold Dust Woman gives "the gold standard of rock biographers" (The Boston Globe) his ideal topic: Nicks' work and life are equally sexy and interesting, and Davis delves deeply into each, unearthing fresh details from new, intimate interviews and interpreting them to present a rich new portrait of the star. Just as Nicks (and Lindsey Buckingham) gave Fleetwood Mac the "shot of adrenaline" they needed to become real rock stars—according to Christine McVie—Gold Dust Woman is vibrant with stories and with a life lived large and hard:
—How Nicks and Buckingham were asked to join Fleetwood Mac and how they turned the band into stars
—The affairs that informed Nicks' greatest songs
—Her relationships with the Eagles' Don Henley and Joe Walsh, and with Fleetwood himself
—Why Nicks married her best friend's widower
—Her dependency on cocaine, drinking and pot, but how it was a decade-long addiction to Klonopin that almost killed her
— Nicks’ successful solo career that has her still performing in venues like Madison Square Garden
—The cult of Nicks and its extension to chart-toppers like Taylor Swift and the Dixie Chicks

STEPHEN DAVIS is America's preeminent rock journalist and biographer, having written numerous bestsellers on rock bands, including the smash hit Hammer of the Gods. He also collaborated with legendary musicians Levon Helm and Mick Fleetwood on their autobiographies. He lives in Boston.

"A captivating portrait of the singer whose songwriting and stage presence gave the faltering British blues band a boost in the mid-1970s...Davis’s candid, energetic book reveals the life of the woman who’s arguably one of rock’s greatest singer-songwriters." - Publisher's Weekly, starred review

"Davis is astute and respectful...adept in his literary analysis." —The New York Times Book Review