The Family Next Door: A Novel (Mass Market) 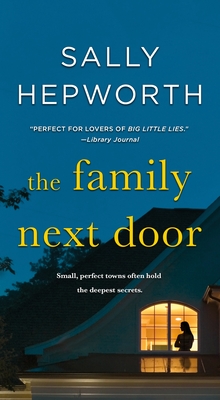 The Family Next Door: A Novel (Mass Market)

A suburban drama about desperate mothers, secrets among neighbors, and the things women keep hidden.

WHEN IT COMES TO THE TRUTH, YOU HAVE TO SEE IT TO BELIEVE IT...

From the outside, Essie’s life looks idyllic: a loving husband, a beautiful house, and a nearby mother who dotes on her granddaughter. But few of Essie’s friends know her secret shame: that in a moment of maternal despair, she once walked away from her newborn, who was asleep in her stroller in a park. Disaster was avoided and Essie got better. But she still is anxious about what could have happened, even as her daughter gets older and she has a second baby.

When a woman named Isabelle moves in next door to Essie, she is an immediate object of curiosity in the neighborhood. Why single, when everyone else is married with children? Why renting, when everyone else owns? What mysterious job does she have? And why is she so fascinated with Essie? As the two women grow closer and Essie’s friends voice their disapproval, it starts to become clear that Isabelle’s choice of address was no accident—and that her presence threatens to bring shocking secrets to light.

Sally Hepworth has lived around the world, spending extended periods in Singapore, the United Kingdom and Canada. She is the author of The Secrets of Midwives, The Things We Keep, The Mother's Promise, The Family Next Door and The Mother-in-Law. Sally now lives in Melbourne with her husband, three children, and one adorable dog.