Murder With a View: A House-Flipper Mystery (Mass Market) 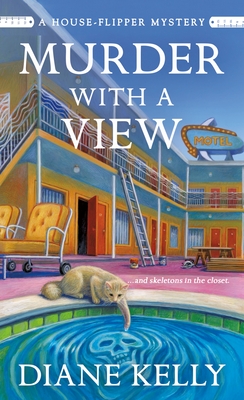 Murder With a View: A House-Flipper Mystery (Mass Market)

This is book number 3 in the A House-Flipper Mystery series.

Murder With a View is the third book in the delightful cozy mystery series from Diane Kelly set in Nashville, Tennessee—where the real estate market is to die for…

Carpenter Whitney Whitaker, her cousin Buck, and guard-cat Sawdust just scored a hot property near downtown Nashville in a tax sale. While the Music City Motor Court might not be much to look at now, the two plan to transform the motel’s twelve units into six one-bedroom condominiums with popular mid-century styling. But surprises await when Whitney discovers a squatter living in Room 9 and her cat Sawdust uncovers a body in the bed next door.

The murder victim is none other than Beckett Morgan, an up-and-coming country-western singing sensation who’s taken Nashville by storm with his number-one hit “Party in the Pasture.” Beckett’s left a long trail of broken promises and broken hearts, and the list of suspects seems endless. So does the line of female fans intent on halting the flip and turning the construction site into a shrine for the deceased star. If Whitney and Buck don’t help Detective Collin Flynn nail the killer, they’ll never be able to clear out the star-obsessed groupies, complete the remodel, and recoup their investment. But just who silenced the singer and why?

Diane Kelly is a former state assistant attorney general and tax advisor who spent much of her career fighting, or inadvertently working for, white-collar criminals. She is also a proud graduate of the Mansfield, Texas Citizens Police Academy. Diane combines her fascination with crime and her love of animals in her stories. Diane now lives in North Carolina, where she spends her days catering to her demanding cats or walking her dogs in the region’s beautiful woods.

One of "The Best 20 Best Crime, Mystery, And Thriller Books of February 2021" —Mystery Tribune

"[Diane] is beloved for her delightfully fun amateur sleuth sagas."—Woman's World (A Book Club Pick of the Week)

"[A] well-written mystery, interesting characters and a cat that shares feelings."—Red Carpet Crash

"The author does a fine job sussing out crazy characters, frenetic fans, and more in this finely tuned plot. Ms. Kelly definitely knows the winning recipe of cozy mysteries. I absolutely love her stories! Murder With a View is a perplexing page-turner!"—Romance Junkies