Down and Out in the Magic Kingdom: A Novel (Paperback) 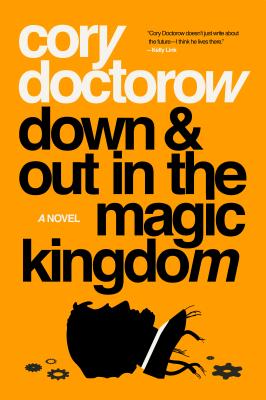 Cory Doctorow's debut cyberpunk science fiction that explores the scarcity of morality in a world that has conquered death and material insufficiency—now repackaged with a new cover!

Jules is a young man barely a century old. He's lived long enough to see the cure for death and the end of scarcity, to learn ten languages and compose three symphonies...and to realize his boyhood dream of taking up residence in Disney World.

Disney World! The greatest artistic achievement of the long-ago twentieth century. Now in the care of a network of volunteer "ad-hocs" who keep the classic attractions running as they always have, enhanced with only the smallest high-tech touches.

Now, though, it seems the "ad hocs" are under attack. A new group has taken over the Hall of the Presidents and is replacing its venerable audioanimatronics with new, immersive direct-to-brain interfaces that give guests the illusion of being Washington, Lincoln, and all the others. For Jules, this is an attack on the artistic purity of Disney World itself.

Worse: it appears this new group has had Jules killed. This upsets him. (It's only his fourth death and revival, after all.) Now it's war: war for the soul of the Magic Kingdom, a war of ever-shifting reputations, technical wizardry, and entirely unpredictable outcomes.

Bursting with cutting-edge speculation and human insight, Cory Doctorow's Down and Out in the Magic Kingdom is a coming-of-age romantic comedy and a kick-butt cybernetic tour de force.

Cory Doctorow is a regular contributor to the Guardian, Locus, and many other publications. He is a special consultant to the Electronic Frontier Foundation, an MIT Media Lab Research Associate and a visiting professor of Computer Science at the Open University. His award-winning novel Little Brother and its sequel Homeland were a New York Times bestsellers. His novella collection Radicalized was a CBC Best Fiction of 2019 selection. Born and raised in Canada, he lives in Los Angeles.

“As much fun as Neal Stephenson's Snow Crash, and as packed with mind-bending ideas.” —Tim O'Reilly

“Down and Out in the Magic Kingdom is black-comedic sci-fi prophecy on the dangers of surrendering our consensual hallucination to the regime. Fun to read, but difficult to sleep afterwards.” —Douglas Rushkoff, author of Cyberia and Media Virus!

“Cory Doctorow is one of our best new writers: smart, daring, savvy, entertaining, ambitious, plugged in, and as good a guide to the wired world of the twenty-first century that stretches out before us as you're going to find anywhere.” —Gardner Dozois, editor, Asimov's SF