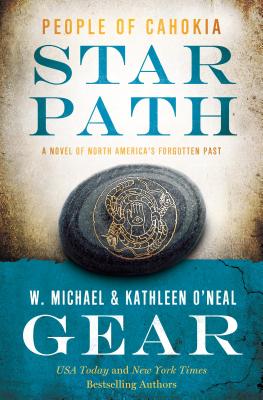 How do you say no to a god?

Cahokia recovers from a year of chaos following a near civil war and the god incarnate, Morning Star, has declared that his human sister Night Shadow Star and her slave Fire Cat must make a dangerous journey to far off Cofitachequi. For an old threat has arisen on the other side of the great eastern mountains - their brother, Walking Smoke, a madman who is convinced that he is the true deity destined to rule Cahokia.

Night Shadow Star is also ruled by the Underworld Lord, Piasa, but this power dangles a chance of happiness in front of Night Shadow Star and Fire Cat – if they succeed with his agenda, they might become nameless, clanless, and worthless. And thus free.

But the treacherous Tenasee River that they must travel holds its own perils.

And at the end of the journey, Walking Smoke prepares to spring his trap.

Star Path, the fourth book in the Gears’ People of Cahokia series, takes the reader out of the great city of Cahokia and into a land of rivers, forests, tribes, and exiled colonies, providing us with a rare look into the mystical underpinnings of Native American culture and the founding of Mississippian civilization.

W. Michael Gear, who holds a master's degree in archaeology, has worked as a professional archaeologist since 1978. He is currently principal investigator for Wind River Archaeological Consultants. With his wife, Kathleen O’Neal Gear, he has written the international and USA Today bestselling North America's Forgotten Past Series (including People of the Songtrail, People of the Morning Star, Sun Born, Moon Hunt, among others); and Anasazi Mystery Series.

Kathleen O'Neal Gear is a former state historian and archaeologist for Wyoming, Kansas, and Nebraska for the U.S. Department of the Interior. She has twice received the federal government's Special Achievement Award for "outstanding management" of our nation's cultural heritage. With her husband, W. Michael Gear, she is the co-author of many books, including the North America’s Forgotten Past series (People of the Songtrail, People of the Morning Star, Sun Born, Moon Hunt, among others); and the Anasazi Mysteries series. She and her husband live in Thermopolis, WY.

Praise for the North America's Forgotten Past Series

“America’s prehistory comes to life once again in the capable hands of the Gears, who never fail to strike the perfect balance between cultural fact and magnificent storytelling.”—Booklist on Moon Hunt

“The Gears have written an epic novel that combines the cultural history of Cahokia with the fast-paced narrative of a thriller to explore the all-too-human and universal dangers of greed and overweening ambition.”—New York Journal of Books on People of the Morning Star

“A magnificent, sweeping world—America, circa 7300 B.C.—that is so real you can almost breathe in the air of it. It tells a bighearted story of war and peace, love and violence, with a cast of richly drawn characters. This is a novel that will stay with you for years—I guarantee it.”—Douglas Preston, New York Times bestselling author, on People of the Raven

“The Gears have brought readers fascinating and richly detailed stories of prehistoric North America with tales as rich in cultural meaning as they are in political context.”—RT Book Reviews on People of the Owl