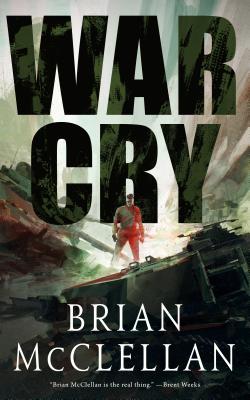 A brand new novella from the author of the acclaimed Powder Mage series.

Teado is a Changer, a shape-shifting military asset trained to win wars. His platoon has been stationed in the Bavares high plains for years, stranded. As they ration supplies and scan the airwaves for news, any news, their numbers dwindle. He's not sure how much time they have left.

Desperate and starving, armed with aging, faulting equipment, the team jumps at the chance for a risky resupply mission, even if it means not all of them might come. What they discover could change the course of the war.

Brian McClellan is an American epic fantasy author from Cleveland, Ohio. He is known for his acclaimed Powder Mage Universe and essays on the life and business of being a writer. Brian now lives on the side of a mountain in Utah with his wife, Michele, where he writes books and nurses a crippling video game addiction.

“Brian McClellan is an explosive powder keg of imagination with an expertly-plotted fuse. The stories he tells are the stories we’ll be reading for years to come.”—Sam Sykes

"Not only the finest flintlock fantasy I’ve read, but also the most fun."—Brent Weeks

“This book is just plain awesome. I found myself enjoying every moment of it. Innovative magic, quick-paced plot, interesting world. I had a blast.” —Brandon Sanderson

“Gunpowder and magic. An explosive combination. Promise of Blood is the best debut I’ve read in ages.”—Peter V. Brett

"Promise of Blood feels like the start of something amazing.” —Django Wexler