The Emoji Code: The Linguistics Behind Smiley Faces and Scaredy Cats (Hardcover) 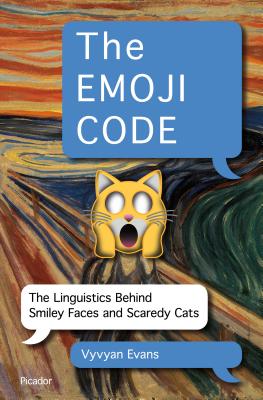 The Emoji Code: The Linguistics Behind Smiley Faces and Scaredy Cats (Hardcover)

Drawing from disciplines as diverse as linguistics, cognitive science, psychology, and neuroscience, The Emoji Code explores how emojis are expanding communication and not ending it.

For all the handwringing about the imminent death of written language, emoji—those happy faces and hearts—is not taking us backward to the dark ages of illiteracy. Every day 41.5 billion texts are sent by one quarter of the world, using 6 million emoji. Evans argues that these symbols enrich our ability to communicate and allow us to express our emotions and induce empathy—ultimately making us all better communicators.

Vyvyan Evans's Emoji Code charts the evolutionary origins of language, the social and cultural factors that govern its use, change, and development; as well as what it reveals about the human mind. In most communication, nonverbal cues are our emotional expression, signal our personality, and are our attitude toward our addressee. They provide the essential means of nuance and are essential to getting our ideas across. But in digital communication, these cues are missing, which can lead to miscommunication. The explosion of emoji, in less than four years, has arisen precisely because it fulfills exactly these functions which are essential for communication but are otherwise absent in texts and emails. Evans persuasively argues that emoji add tone and an emotional voice and nuance, making us more effective communicators in the digital age.

PROFESSOR VYVYAN EVANS is an internationally renowned expert on language and communication. He received his PhD in Linguistics from Georgetown University, Washington DC., and has taught at the University of Sussex, Brighton University and Bangor University. He has published 14 books on language, meaning and mind, including The Language Myth: Why Language is Not an Instinct (2014) and The Crucible of Language: How Language and Mind Create Meaning (2015). Evans is a much sought-after public speaker, and frequently provides expert opinion on language to the written and broadcast media. His writing has been featured in CNN Style, The New York Post, The Guardian, Nautilus Magazine, Newsweek, New Scientist, and Psychology Today, among other publications.

“[Evans] effectively argues the case that, rather than eroding our collective ability to write, emojis are improving communication, though in largely extralinguistic ways…[A] significant study. Evans’s conclusion astutely distinguishes between changes in language itself and changes in technologies of communication; we would all do well to follow his lead.”—Peter Sokolowski, The New York Times Book Review

“The Emoji Code is a linguistic analysis written for the everyperson... a thoughtful and informative first look into the linguistic world behind Emoji and textspeak… A book about effective communication in the digital age, The Emoji Codepractices the very ideas it explores in order to produce a volume that is accessible for any reader…. An important publication in today’s world…. Before sending your next text message or posting your next tweet, consider whether an emoji would clarify your tone and add nuance to your digital voice. The Emoji Code not only explains how and why this happens; it also charts a path forward into the future of written communication.”—Logan Quigley, Edge Media Network

"For Evans, language is power—and accordingly, the book takes a wider view...An illuminating look into the origins, development, and relevance of this bold new language."—Jason Heller, NPR

“A thorough exploration...[Evans] champions emojis against those who have seen the cheeky pictographs not as extensions of English, but as a threat to it.”—Megan Garber, The Atlantic