The Idea of You: A Novel (Paperback) 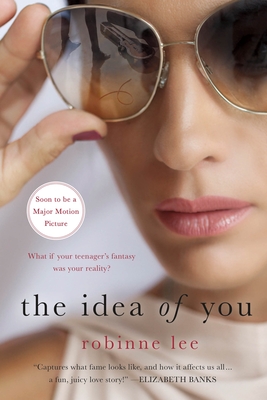 The Idea of You: A Novel (Paperback)

"The sleeper hit of the pandemic . . . . There is no escapism like reading about a nearly middle-aged woman embarking on a glittering, global love affair with a thoughtful young sex god . . . . It's electric, triumphant to read." —Vogue.com

Solène Marchand, the thirty-nine-year-old owner of an art gallery in Los Angeles, is reluctant to take her daughter, Isabelle, to meet her favorite boy band. But since her divorce, she’s more eager than ever to be close to Isabelle. The last thing Solène expects is to make a connection with one of the members of the world-famous August Moon. But Hayes Campbell is clever, winning, confident, and posh, and the attraction is immediate. That he is all of twenty years old further complicates things.

What begins as a series of clandestine trysts quickly evolves into a passionate and genuine relationship. It is a journey that spans continents as Solène and Hayes navigate each other’s worlds: from stadium tours to international art fairs to secluded hideaways in Paris and Miami. For Solène, it is a reclaiming of self, as well as a rediscovery of happiness and love. When Solène and Hayes’ romance becomes a viral sensation, and both she and her daughter become the target of rabid fans and an insatiable media, Solène must face how her romantic life has impacted the lives of those she cares about most.

The Idea of You is actor, writer, and producer ROBINNE LEE's debut novel. A graduate of Yale University and Columbia Law School, Robinne was born and raised in Westchester County, New York. Robinne has numerous acting credits in both television and film, most notably opposite Will Smith in both Hitch and Seven Pounds and as Ros Bailey in Fifty Shades Darker and Fifty Shades Freed. She lives in Los Angeles with her husband and two children.

"The sleeper hit of the pandemic . . . . There is no escapism like reading about a nearly middle-aged woman embarking on a glittering, global love affair withb a thoughtful young sex god . . . . It's electric, triumphant to read." —Vogue.com

"Actress Lee, who appeared in Fifty Shades Darker, debuts with a beautifully written novel that explores sex, love, romance, and fantasy in moving, insightful ways while also examining a woman's struggle with aging and sexism, with a nod at the tension between celebrity and privacy. A fascinating, thought-provoking, genre-bending romantic read." —Kirkus Reviews

"This sexy and bittersweet debut by actress-turned-author Lee zeros in on Solene’s struggle as she is torn between her desire for Hayes and her need to live a normal life." —Booklist

"An OMG page-turner that literally sucks you in from page one to the last few words. I found myself yearning for more, needing, really, to know what happens next...it's that good." —Gabrielle Union

"Captures what fame looks like, and how it affects us all...a fun, juicy love story!" —Elizabeth Banks

"Not only is this romance a fun ride, but it also draws on themes of celebrity and sexism that will give you something to think about after you're done." —Bustle

"An honest and elegant book about modern love in the age of uber-celebrity and social media." —Hill Harper