The Family Next Door: A Novel (Paperback) 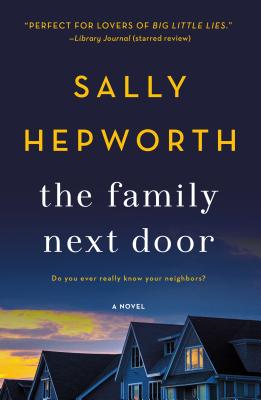 The Family Next Door: A Novel (Paperback)

"With jaw-dropping discoveries and realistic consequences, this novel is not to be missed. Perfect for lovers of Big Little Lies." —Library Journal, starred review

From the outside, Essie’s life looks idyllic: a loving husband, a beautiful house in a good neighborhood, and a nearby mother who dotes on her grandchildren. But few of Essie’s friends know her secret shame: that in a moment of maternal despair, she once walked away from her newborn, asleep in her carriage in a park. Disaster was avoided and Essie got better, but she still fears what lurks inside her, even as her daughter gets older and she has a second baby.

When a new woman named Isabelle moves in next door to Essie, she is an immediate object of curiosity in the neighborhood. Why single, when everyone else is married with children? Why renting, when everyone else owns? What mysterious job does she have? And why is she so fascinated with Essie? As the two women grow closer and Essie’s friends voice their disapproval, it starts to become clear that Isabelle’s choice of neighborhood was no accident. And that her presence threatens to bring shocking secrets to light.

The Family Next Door is Sally Hepworth at her very best: at once a deeply moving portrait of family drama and a compelling suburban mystery that will keep you hooked until the very last page.

Sally Hepworth has lived around the world, spending extended periods in Singapore, the United Kingdom and Canada. She is the author of The Secrets of Midwives, The Things We Keep, The Mother's Promise, The Family Next Door and The Mother-in-Law. Sally now lives in Melbourne with her husband, three children, and one adorable dog.

Praise for The Family Next Door:

“A work full of searing secrets and riveting revelations…Readers will be sucked in from the first page…This novel is not to be missed…It will stick with readers for a long time.” —Library Journal (starred review)

“Big Little Lies fans, this one’s for you.” —Harper’s Bazaar

"Hepworth deftly keeps the reader turning pages and looking for clues, all the while building multilayered characters and carefully doling out bits of their motivations." —Booklist