Ivory Vikings: The Mystery of the Most Famous Chessmen in the World and the Woman Who Made Them (Paperback) 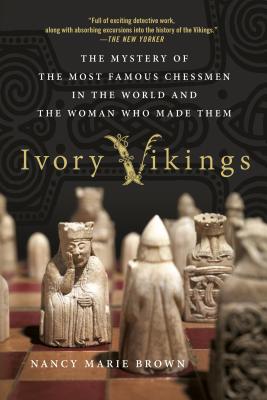 Ivory Vikings: The Mystery of the Most Famous Chessmen in the World and the Woman Who Made Them (Paperback)

“A fascinating tale of discovery and mystery.” —The Minneapolis Star Tribune

In the early 1800's, on a Hebridean beach in Scotland, the sea exposed an ancient treasure cache: 93 chessmen carved from walrus ivory. The Lewis Chessmen are probably the most famous chess pieces in the world. Harry played Wizard's Chess with them in Harry Potter and the Sorcerer's Stone. Housed at the British Museum, they are among its most visited and beloved objects.

Questions abounded: Who carved them? Where? Nancy Marie Brown's Ivory Vikings explores these mysteries by connecting medieval Icelandic sagas with modern archaeology, art history, forensics, and the history of board games. In the process, Ivory Vikings presents a vivid history of the 400 years when the Vikings ruled the North Atlantic, and the sea-road connected countries and islands we think of as far apart and culturally distinct: Norway and Scotland, Ireland and Iceland, and Greenland and North America. The story of the Lewis chessmen brings from the shadows an extraordinarily talented woman artist of the twelfth century: Margret the Adroit of Iceland.

Nancy Marie Brown is the author of highly praised books of nonfiction, including Song of the Vikings and Ivory Vikings. They have been favorably reviewed in The New Yorker, The New York Times, The Economist, The Times Literary Supplement, The Wall Street Journal, and many other publications. Brown has spent decades studying Icelandic literature and culture. She lives on a farm in Vermont where she keeps four Icelandic horses and an Icelandic sheepdog.

"Brown...believes the [Lewis] chessmen were carved in Iceland by a master craftswoman, Margaret the Adroit, reputed at the time to be the best carver in Iceland and who worked for Bishop Pall of Skalholt. This book, which reads like a mystery novel, presents her evidence and the long complicated path to that conclusion." —Annie Proulx, The Millions

"Full of exciting detective work, along with absorbing excursions into the history of the Vikings, of chess in the Middle Ages, and of walrus ivory (known as “arctic gold”)." —The New Yorker

“A fascinating tale of discovery and mystery.” —The Minneapolis Star Tribune

“The absorbing story of long-ago links between the British Isles and Scandinavia that puts the Lewis chessmen into a vivid and much broader cultural context of Viking trade, plunder and sophisticated gift-giving…an engaging, accessible tale.” —The Economist

"If you want books that are very readable, those by Nancy Marie Brown are highly recommended.” —Medievalists.net

“A delight...for gamers of all sorts as well as anyone interested in the intricacies of the provenance of art and in endlessly fascinating minutiae-the strength and uses of walrus skin, how to carve walrus ivory, and so much more.” —Booklist

“Fascinating ... Brown successfully crafts an Icelandic history of chess while tracing the possible movements of 92 remarkable carved figures found in the early 19th century on the Isle of Lewis in Scotland....” —Publisher's Weekly

“Even if you've never played a game of chess in your life, this book is bound to fascinate.” —Matthew Driscoll, senior lecturer in Old Norse philology, Arnamagnæan Institute, University of Copenhagen

“Nancy Marie Brown's book is a true cornucopia, bursting with delicious revelations. Whether your passion is chess, art, archeology, literature or the uncanny and beautiful landscape of Iceland, Ivory Vikings offers rich and original insights by a writer who is as erudite as she is engaging.” —Geraldine Brooks, author of CALEB'S CROSSING

“Ivory Vikings is an erudite and accessible treatment of the world of the Vikings. Focusing on the famous Lewis chessmen, it suggests they might have been created in Iceland by a woman. Fascinating history for lovers of Old Norse society and chess.” —Marilyn Yalom, author of BIRTH OF THE CHESS QUEEN and HOW THE FRENCH INVENTED LOVE

“A lively introduction to the world of the Vikings and medieval Scandinavia, seen through the story of the Lewis chessmen. Brown does a superb job of exploring the personalities and personal connections that underpinned political and cultural relations across the North Atlantic and the North Sea. Her informed, even-handed reassessment of the origin of the chessmen certainly changed my mind.” —Elizabeth Ashman Rowe, FSA, Reader in Scandinavian History, University of Cambridge

“I enjoyed the hell out of Ivory Vikings. Renowned Norse scholar Nancy Marie Brown follows the Lewis chessmen's trail back to a 12th century master named Margret the Adroit. Piece by piece, Brown also peels back a millennia of history to explore the Norse world's interlocking social facets -- kings, queens, berserkers, nobles, bishops and poets -- that populated Viking society much as these carved ivory pieces populated a chessboard. The result is part mystery, part history, and wholly engrossing.” —Scott Weidensaul, author of THE FIRST FRONTIER

“Nancy Marie Brown has used skillful writing and her deep knowledge of the medieval Viking world to bring us a mysterious tale of the most appealing game pieces ever made, the Lewis chessmen.” —Pat Shipman, author of THE INVADERS: How Humans and Their Dogs Drove Neanderthals to Extinction

“A wonderful read. Brown knows how to hold the reader´s attention as she digs deep into Icelandic sagas, archaeology, forensics, and art history to solve a mystery about the Lewis chessmen, the North Atlantic's most famous medieval treasure.” —Prof. Jesse Byock, author of VIKING LANGUAGE: Learn Old Norse, Runes, and Icelandic Sagas

“Always lively, engaging, thoughtful, humorous, and to the point, ... She draws a colorful picture of what life may have been like at the time and brings the fate of known but long-gone men and women close to the heart of the modern reader.” —Gisli Sigurdsson, The Árni Magnússon Institute for Icelandic Studies

“With obvious linguistic skill and respect for historical detail as well as a passion for travel to unearth the truth, Brown offers a tantalizing trail of plausibility.” —Patrick J. Stevens, Librarian/Curator, Cornell University Library

“An intriguing work that should find a readership among history lovers.” —Library Journal