Accidental Brothers: The Story of Twins Exchanged at Birth and the Power of Nature and Nurture (Hardcover) 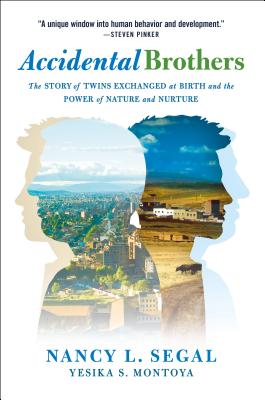 Accidental Brothers: The Story of Twins Exchanged at Birth and the Power of Nature and Nurture (Hardcover)

"A unique window into human behavior and development." —Steven Pinker

The riveting story of two sets of identical twins separated at birth and improbably reunited as adults, a dream case for exploring nature and nurture.

Accidental Brothers tells the unique story of two sets of identical Colombian twin brothers who discovered at age 25 that they were mistakenly raised as fraternal twins—when they were not even biological brothers. Due to an oversight that presumably occurred in the hospital nursery, one twin in each pair was switched with a twin in the other pair. The result was two sets of unrelated “fraternal” twins—Jorge and Carlos, who were raised in the lively city of Bogotá; and William and Wilber, who were raised in the remote rural village of La Paz, 150 miles away. Their parents and siblings were aware of the enormous physical and behavioral differences between the members of each set, but never doubted that the two belonged in their biological families.

Everyone’s life unraveled when one of the twins—William—was mistaken by a young woman for his real identical twin, Jorge. Her “discovery” led to the truth—that the alleged twins were not twins at all, but rather unrelated individuals who ended up with the wrong families.

Blending great science and human interest, Accidental Brothers by Nancy L. Segal and Yesika S. Montoya will inform and entertain anyone interested in how twin studies illuminate the origins of human behavior, as well as mother-infant identification and the chance events that can have profound consequences on our lives.

DR. NANCY L. SEGAL is Professor of Psychology at California State University, Fullerton (CSUF) and Director of the Twin Studies Center, which she founded in 1991. She received a B.A. degree in psychology and English literature from Boston University, and M.A. and Ph.D. degrees from the University of Chicago. Dr. Segal has authored over 200 scientific articles and book chapters, as well as several books on twins, including the award-winning Born Together-Reared Apart: The Landmark Minnesota Twin Study. As an expert on twins and twin development, she has appeared on numerous national and international programs, such as the Today Show, Good Morning America, CBS This Morning, National Public Radio and the Forum (BBC). Her work has been cited in the New York Times, Wall Street Journal and Chicago Tribune. In 2014, Dr. Segal was recognized by the Orange County Register as one of the hundred most influential people in Orange County, California,

Yesika S. Montoya has a psychology degree from the Universidad Santo Tomas (2000) in her native country of Colombia. She also received her Master of Social Work degree from Fordham University (2005). Ms. Montoya has clinical work experience providing psychotherapy to children, adolescents, adults, and people affected by homelessness, mental illness, chemical addiction and HIV. Ms. Montoya worked with the rescue, recovery and clean-up workers after the 9/11 attacks in New York City. She is currently employed in higher education as an Associate Director of Advising and an adjunct faculty member at the Columbia University School of Social Work.

Yesika is the coauthor of Accidental Brothers: The Story of Twins Exchanged at Birth and the Power of Nature and Nurture.

"Fascinating...Segal presents intriguing data regarding twins and the effects of nature and nurture on other twins who have been separated at birth." —Susan Stump, Multiples of America

"Segal and Montoya tell...the shock, the first meetings of the biological brothers, and of its impact as the families processed the unanswerable questions of what might have been." —Bostonia

"In 2014, Segal stumbled on the eighth and ninth publicly known switched-at-birth cases, an even more bizarre story of two sets of brothers in Colombia... Segal traveled to Colombia to study the four young men, and write about their journeys in Accidental Brothers." —The Atlantic

"Tells the story of two sets of identical twins in Colombia — one of whom in each pair was swapped at birth." —The Orange County Register

"The rare group of switched-at-birth identical twins is not just fascinating, but a unique window into human behavior and development. Accidental Brothers brilliantly captures the extraordinary story of two pairs of exchanged identical male twins in Colombia, South America, tracing their separation, growing up years, chance reunion and ultimate coming to terms with the profound impact of the switch on their lives." —Steven Pinker, Johnstone Professor of Psychology at Harvard University and author of Enlightenment Now: The Case for Reason, Science, Humanism, and Progress

"Nancy Segal describes a birth mix-up that takes 'mistaken identity' to a whole new level, with two sets of twins involved in the switch. So many layers of complications! Her research offers a new way to think about thorny questions regarding genes, environment, and destiny." —Robin Marantz Henig, author of Pandora's Baby: How the First Test Tube Babies Sparked the Reproductive Revolution

“A fascinating book from start to finish. It is simultaneously a tale of two sets of identical twins accidentally separated at birth and a tale of the science of the genetic and environmental forces that makes us who we are. It is sterling in its science and dramatic in the details of these four lives lived. It’s the best book I’ve read this year.” —David M. Buss, author of Evolutionary Psychology: The New Science of the Mind

“This beautiful and moving story is told in a gripping narrative of what has to be the most compelling example ever recorded of twins switched at birth. At once tragic and uplifting, I was deeply moved, and you will be, too." —Michael Shermer, publisher of Skeptic magazine and author of Heavens on Earth: The Scientific Search for the Afterlife, Immortality, and Utopia