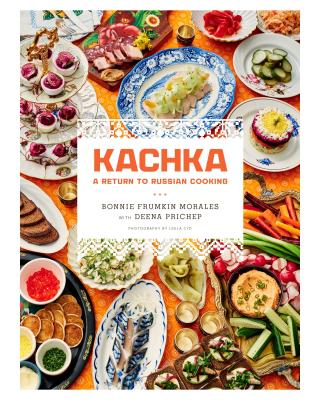 “With Kachka, Bonnie Morales has done something amazing: thoroughly update and modernize Russian cuisine while steadfastly holding to its traditions and spirit. Thank you comrade!”
—Alton Brown

From bright pickles to pillowy dumplings, ingenious vodka infusions to traditional homestyle dishes, and varied zakuski to satisfying sweets, Kachka the cookbook covers the vivid world of Russian cuisine. More than 100 recipes show how easy it is to eat, drink, and open your heart in Soviet-inspired style, from the celebrated restaurant that is changing how America thinks about Russian food.

The recipes in this book set a communal table with nostalgic Eastern European dishes like Caucasus-inspired meatballs, Porcini Barley Soup, and Cauliflower Schnitzel, and give new and exciting twists to current food trends like pickling, fermentation, and bone broths.

Kachka’s recipes and narratives show how Russia’s storied tradition of smoked fish, cultured dairy, and a shot of vodka can be celebratory, elegant, and as easy as meat and potatoes. The food is clear and inviting, rooted in the past yet not at all afraid to play around and wear its punk rock heart on its sleeve.

As the first-generation American daughter of Belarusian immigrants, chef Bonnie Frumkin Morales has a unique view on the culture and food of the former Soviet Union. Bonnie honed her skills in several of New York and Chicago’s Michelin starred restaurants. Bonnie and her husband Israel opened Kachka to much critical acclaim in 2014, receiving accolades from publications such as Bon Appétit, The Wall Street Journal, The New York Times, GQ, Elle, Zagat's, and Food & Wine. Bonnie lives in Portland, Oregon. Kachka: A Return to Russian Cooking is her first cookbook.

Journalist Deena Prichep cut her teeth on pickled green tomatoes in her grandfather's New York deli, and has covered topics ranging from Ramadan recipes to gefilte fish for NPR, PRI's The World, Bon Appetit, and Marketplace.

"This fantastic cookbook by the chef at Kachka in Portland, Ore., is by turns funny, moving, informative, and appetite-whetting."
—Publishers Weekly

"The last time I was in Portland I ate at Kachka twice in 24 hours. It's everything you want from a dining experience: a table covered end to end with cocktails, caviar, pickles, piroshki, and dumplings. It’s so immediately and obviously wonderful that you want every night to unfold the same way. With this book, it feels possible."
—Danny Bowien

"Portlandia meets my late grandmother. Kachka is the best guide to Russian cooking yet. It has reinvigorated my relationship with mayonnaise."
—Gary Shteyngart

“With Kachka, Bonnie Morales has done something amazing: thoroughly update and modernize Russian cuisine while steadfastly holding to its traditions and spirit. Thank you comrade!”
—Alton Brown

"'Where should we eat in Portland?' my visiting friends often ask; 'Kachka!' I invariably answer. Bonnie and Israel have created an amazing restaurant where zakuski fills the table, Soviet pop music fills the air and horseradish vodka washes it all down. This book captures the vibrancy and history of the food, the excitement of the restaurant and the generosity of the culture. Essential!"
—Andy Ricker

“If ever there was a moment for Russian Cuisine to ascend into American mainstream culture, this is it. The curing and pickling crazes from recent years have primed our palates for northern Eurasian Flavors. Affordable caviar and electric orange salmon roe are now ubiquitous garnishes on restaurant plates. And who doesn't want to spend a few happy moments with a bowl of silken dumplings?”
—Eater National, “Blinis are the New Black at Portland’s Kachka”