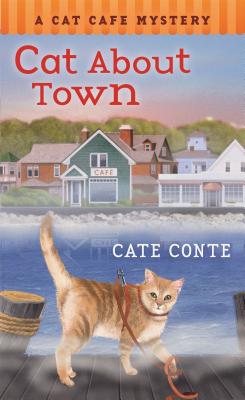 This is book number 1 in the Cat Cafe Mystery Series series.

The first novel in a frisky new mystery series set in a small New England town, where an unlikely citizen is called in to solve the purrfect crime. . .

Maddie James has arrived in Daybreak Island, just off the coast of Massachusetts, eager to settle down and start her own business—and maybe even fall in love. When a stray orange tabby pounces into her life, she’s inspired to open a cat café. But little does Maddie know that she’s in for something a lot more catastrophic when her new furry companion finds the dead body of the town bully. Now all eyes are on Maddie: Who is this crazy cat-whisperer lady who’s come to town? If pet-hair-maintenance and crime-fighting weren’t keeping her busy enough, Maddie now has not one but two eligible bachelors who think she’s the cat’s pajamas . . . and will do anything to win her heart. But how can she even think about happily-ever-after while a killer remains on the loose—and on her path?

Cate Conte writes the Cat Cafe Mysteries and the new Full Moon Mysteries. As Liz Mugavero, she writes the Pawsitively Organic Mysteries, the first of which was an Agatha Award nominee for Best First Novel. She lives in Connecticut with her rescue pals.

"What could be more enticing for bibliophiles than the mixture of love and small-town intrigue that Cate Conte serves up in Cat About Town? Conte's well-plotted novel with a host of likeable characters is a Valentine for any cat lover."--Best Friends Magazine