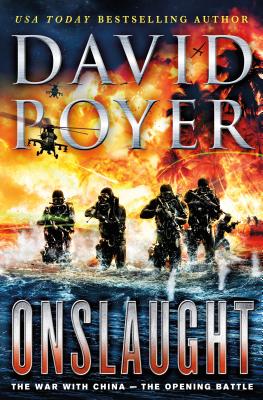 This is book number 16 in the Dan Lenson Novels series.

Onslaught chronicles Captain Dan Lenson’s latest challenge as the U.S. Navy struggles to hold Taiwan, Korea, and Japan against a massive Chinese offensive. The prize: domination of Asia and the Western Pacific.
As the United States’ computer, satellite, and financial networks are ravaged by coordinated cyberwar attacks, China and its Associated Powers begin to roll up and intimidate American allies, launching invasions of India, Taiwan, South Korea, and Okinawa. USS Savo Island, captained by Lenson, is one of the few forces left to stop them. But with a crew under attack from an unknown assailant aboard their own ship, and rapidly running out of ordnance against waves of enemy missiles and torpedoes, can Dan and his scratch-team task force hold the line? Or will the U.S. lose the Pacific—and perhaps much more—to an aggressive and expansionist new People’s Empire?

The most explosive novel yet in the long-running Dan Lenson series, David Poyer's Onslaught follows Tipping Point to unfold an utterly convincing scenario of how a global war with China could unfold.

"While reading David Poyer, you have to keep reminding yourself that this is fiction. He may be the top expert on the modern American Navy outside of the Pentagon." - The Florida Times-Union