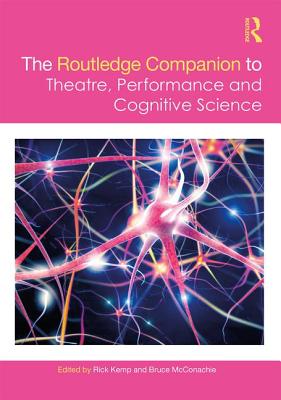 The Routledge Companion to Theatre, Performance and Cognitive Science integrates key findings from the cognitive sciences (cognitive psychology, neuroscience, evolutionary studies and relevant social sciences) with insights from theatre and performance studies. This rapidly expanding interdisciplinary field dynamically advances critical and theoretical knowledge, as well as driving innovation in practice. The anthology includes 30 specially commissioned chapters, many written by authors who have been at the cutting-edge of research and practice in the field over the last 15 years. These authors offer many empirical answers to four significant questions:

How can performances in theatre, dance and other media achieve more emotional and social impact? How can we become more adept teachers and learners of performance both within and outside of classrooms? What can the cognitive sciences reveal about the nature of drama and human nature in general? How can knowledge transfer, from a synthesis of science and performance, assist professionals such as nurses, care-givers, therapists and emergency workers in their jobs?

A wide-ranging and authoritative guide, The Routledge Companion to Theatre, Performance and Cognitive Science is an accessible tool for not only students, but practitioners and researchers in the arts and sciences as well.

Rick Kemp is Professor of Theatre and Head of Acting and Directing at Indiana University of Pennsylvania, USA. An actor, director and Fellow of the Salzburg Global Seminar on Neuroscience and Art, his publications include Embodied Acting: What Neuroscience Tells Us About Performance (2012) and The Routledge Companion to Jacques Lecoq (2016).Bruce McConachie, Emeritus Professor at the University of Pittsburgh, USA, has published widely in theatre history and cognitive studies. His scholarship includes Engaging Audiences (2008), Evolution, Cognition, and Performance (2015), and chapters in Theatre Histories: An Introduction (3rd edition, 2016). A former president of the American Society for Theatre Research, McConachie also acts and directs.