The Supermodel and the Brillo Box: Back Stories and Peculiar Economics from the World of Contemporary Art (Hardcover) 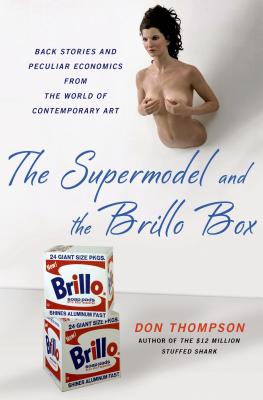 The Supermodel and the Brillo Box: Back Stories and Peculiar Economics from the World of Contemporary Art (Hardcover)

Out of Print
Acquiring contemporary art is about passion and lust, but it is also about branding, about the back story that comes with the art, about the relationship of money and status, and, sometimes, about celebrity. The Supermodel and the Brillo Box follows Don Thompson's 2008 bestseller The $12 Million Stuffed Shark and offers a further journey of discovery into what the Crash of 2008 did to the art market and the changing methods that the major auction houses and dealerships have implemented since then. It describes what happened to that market after the economic implosion following the collapse of Lehman Brothers and offers insights and art-world tales from dealers, auction houses, and former executives of each, from New York and London to Abu Dhabi and Beijing. It begins with the story of a wax, trophy-style, nude upper-body sculpture of supermodel Stephanie Seymour by Italian artist Maurizio Cattelan, which sold for $2.4 million to New York über-collector and private dealer Jose Mugrabi, and recounts the story of a wooden Brillo box that sold for $722,500. The Supermodel and the Brillo Box looks at the increasing dominance of Christie's, Sotheby's, and a few über dealers; the hundreds of millions of new museums coming up in cities like Dubai, Abu Dhabi, and Beijing; the growing importance of the digital art world; and the shrinking role of the mainstream gallery.
Don Thompson is an economist and Emeritus Nabisco Brands Professor of Marketing and Strategy at the Schulich School of Business at York University in Toronto. He is the author of The Supermodel and the Brillo Box. He has taught at Harvard Business School and the London School of Economics, and is the author of 11 books. He writes on the economics of the art market for publications as diverse as The Times (London), Harper’s Magazine, and The Art Economist. He lives in Toronto, Canada.

“Bringing an economist's curiosity to the inner workings of the contemporary art market, Don Thompson manages once again to explain, in laymen's terms, how a lot of it works.” —Sarah Douglas, Culture Editor, The New York Observer

“Don delivers entertaining and thoughtful insights into the inner workings of the art business, and does so in style! Check for Don's pointers on how to play the quiz of the contemporary art market. Very rewarding reading.” —Sergey Skaterschikov, Founder, Skate's Art Market Research

“I started reading The Supermodel and the Brillo Box and could not put it down until I finished it! Interesting to read about a world one knows well looked at through a different perspective. For anyone who wants to learn about the art market is a must read.” —Pilar Ordovas, Ordovas gallery, London, and former deputy chairman for Postwar and Contemporary art, Christie's Europe