In Other Words (Paperback) 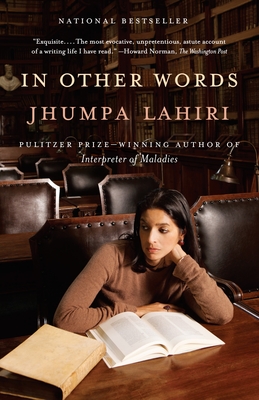 In Other Words (Paperback)

“Lahiri traces the origins, tribulations, and tiny victories that have fueled her decades-long courtship with the Italian language in a bilingual memoir that reads more like an intimate diary. The chapters and short stories offer a vivid timeline of Lahiri's turbulent relationship with language, bouncing around from English to Bengali during her childhood, immersing herself in the Italian culture by moving her family overseas, and finally attempting to write a book in a new voice. In Other Words is much more than an attempt -- at self-reflection and reinvention it's a mastery.”
— Carly Lenz (M), Boswell Book Company, Milwaukee, WI

On a post-college visit to Florence, Pulitzer Prize-winning author Jhumpa Lahiri fell in love with the Italian language. Twenty years later, seeking total immersion, she and her family relocated to Rome, where she began to read and write solely in her adopted tongue. A startling act of self-reflection, In Other Words is Lahiri’s meditation on the process of learning to express herself in another language—and the stunning journey of a writer seeking a new voice.
Jhumpa Lahiri is the author of four works of fiction: Interpreter of Maladies, The Namesake, Unaccustomed Earth, and The Lowland; and a work of nonfiction, In Other Words. She has received numerous awards, including the Pulitzer Prize; the PEN/Hemingway Award; the PEN/Malamud Award; the Frank O’Connor International Short Story Award; the Premio Gregor von Rezzori; the DSC Prize for South Asian Literature; a 2014 National Humanities Medal, awarded by President Barack Obama; and the Premio Internazionale Viareggio-Versilia, for In altre parole.

Ann Goldstein is an editor at The New Yorker. She has translated works by, among others, Elena Ferrante, Pier Paolo Pasolini, Primo Levi, Giacomo Leopardi, and Alessandro Baricco, and is the editor of The Complete Works of Primo Levi in English. She has been the recipient of the PEN Renato Poggioli Translation Award, a Guggenheim Fellowship, and awards from the Italian Foreign Ministry and from the American Academy of Arts and Letters.

“Gorgeous. . . . Lahiri gives us the most unusual of self-portraits.” —The New York Times Book Review

“Exquisite. . . . Strikingly honest, lyrical, untouched by sentimentality. . . . The most evocative, unpretentious, astute account of a writing life I have read.” —Howard Norman, The Washington Post

“As much a work of poetry as prose. . . . Beautiful.” —Minneapolis Star Tribune

“Magnificent. . . . [In Other Words] puts one in the company of a beautiful mind engaged in a sustained and bracing discipline.” —Los Angeles Times

“In Lahiri’s hands, these essays and stories become an invaluable insight into the craft of writing not as storytelling but as speaking the self into existence.” —San Francisco Chronicle