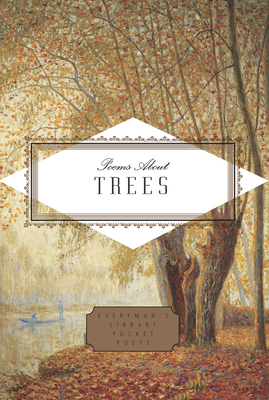 Beautiful poetry collection perfect for walking in the woods.

— Brad
A unique anthology of poems--from around the world and through the ages--that celebrate trees.

For thousands of years humans have variously worshipped trees, made use of them, admired them, and destroyed them--and poets have long chronicled the relationship. Poets from Homer and Virgil to Wordsworth, Whitman, and Thoreau, from Su Tung P'o and Basho to Czeslaw Milosz and W. S. Merwin have celebrated sacred groves, wild woodlands, and bountiful orchards, and the results include some of our most beloved poems.

Robert Frost's "Birches," Marianne Moore's "The Camperdown Elm," Gerard Manley Hopkins's "Binsey Poplars," and Zbigniew Herbert's "Sequoia" stand tall beside Eugenio Montale's "The Lemon Trees," Yves Bonnefoy's "The Apples," Bertolt Brecht's "The Plum Tree," D. H. Lawrence's "The Almond Tree," and A. E. Housman's "Loveliest of Trees." Whether showing their subjects being planted or felled, cherished or lamented, towering in forests or flowering in backyards, the poems collected here pay lyrical tribute to these majestic beings with whom we share the earth.
HARRY THOMAS is the editor of Selected Poems of Thomas Hardy (Penguin, 1993) and Montale in English (Penguin, 2002). His poems, translations, essays, and reviews have appeared in dozens of magazines. He is editor in chief of Handsel Books, an imprint of Other Press and an affiliate of W. W. Norton.