I'd Still Say Yes: A Dreamers Account of Surviving the Entertainment Business (Paperback) 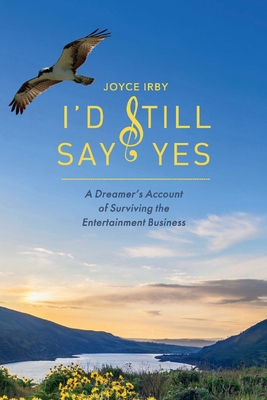 I'd Still Say Yes: A Dreamers Account of Surviving the Entertainment Business (Paperback)

The true story, "I'd Still Say Yes" from the heart of Joyce "Fenderella" Irby, chronicles her adventures as an architect of musical Atlanta. Her rise began with the 80's LA based all-girl band Klymaxx and their mega smashes "Meeting In The Ladies Room", "The Men All Pause" and "I Miss You".

Joyce details her personal experiences with many, entertainers, sports celebrities and music executives as she recounts endless battles within an industry that chronically underpays, overlooks and routinely de-values women for sport. Described by many as the original "wind beneath the wings" of the Atlanta music scene, she garnered major high-dollar industry attention to a city that was known mainly for its quaint musical past. But in the late 80's and early 90s Joyce lit a fire that exploded and propelled Atlanta into the foundation of an industry cornerstone atop the contemporary music world. Her music production company "Diva One" began an avalanche that created hundreds of millions of dollars in revenue for the major record labels, and new Atlanta millionaires. But she would never receive her share of the wealth created. Consequently, she was isolated, unjustly vilified, black-balled, cast aside and metaphorically left for dead on the side of the road. Having lost everything but her will…Joyce found herself on a path of illumination and discovery. Sheroes emerge, baptized by fire. And now, one woman with the heart of a lion returns to claim her rightful place in Her-Story

The memoir subtitled, "A Dreamers Account of Surviving the Entertainment Business" could also be called, "Finding your path of peace, in a superficial, youth obsessed culture, that values nothing of value!"

Joyce's Diva One Music & Production companies in the late 80's and early 90s lit a fire that exploded and propelled Atlanta into the foundation of an industry cornerstone atop the contemporary music world. Her music production company "Diva One" began an avalanche that created hundreds of millions of dollars in revenue.

In June of 2019, Joyce was honored with a proclamation from the Atlanta City Council. As a major contributor to Atlanta's rise in music industry stature, Joyce is considered by many to be "the wind beneath the wings", of Atlanta's urban music scene as described by Councilman Michael Julian Bond during the presentation. Joyce's publishing company, "Diva One Music" has songs with sales of over 20 million, including hits by TLC, Chris Brown, Boyz II Men, Shalamar, Fat Joe, Klymaxx, Troop, and more.

In 2012 Joyce won an ASCAP songwriter award for co-penning one of the most played Urban records in the US, a top 5 single, "Another Round", by Fat Joe, Chris Brown. In 2014 BET profiled Irby as one of a dozen women in "Unsung Hitmakers: Female Music Producers". Joyce as a solo artist on Motown, also had a Billboard #1 selling urban hip-hop single, "Mr. D.J." with Doug E. Fresh.

Joyce is an animal advocate and volunteers for her local Humane Society and ASPCA. She started her own charity "Jams For Animals" to promote kindness to animals through music and video. A lover of science and astronomy, Joyce is a strong advocate for women and girls being more involved in many non-traditional areas of learning and science. She also wrote her memoir, "I'd Still Say Yes", in hopes of encouraging others to share their stories.