Deconstructing The Rat Pack: Joey, The Mob and the Summit (Paperback) 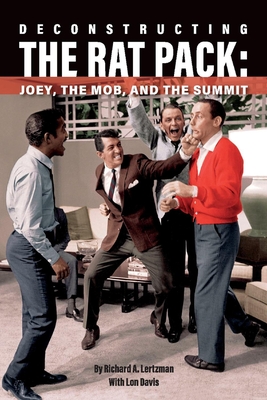 Deconstructing The Rat Pack: Joey, The Mob and the Summit (Paperback)

By Richard A. Lertzman, Lon Davis


Usually Ships in 1-5 Days
"Deconstructing the Rat Pack: Joey, The Mob and the Summit" is a new look at the true creation of the group of entertainers that rocked the world. For twenty-eight consecutive nights in February 1960, a dusty town called Las Vegas became the epicenter of the world. All eyes were on the party happening at the Sands Hotel and Casino, the new headquarters for The Chairman of the Board— Frank Sinatra.

In celebration of the Rat Pack's Sixtieth anniversary this book details the meteoric rise of this infamous group. For the first time, this outrageous, explosive tell-all book brings the inside scoop of how The Mob, The Future President and five of the greatest entertainers took the world by storm.
Richard A. Lertzman is the author of several books including "Dr. Feelgood," "The Life and Times of Mickey Rooney," "Beyond Columbo: The Life and Times of Peter Falk" and "The Dr. Feelgood Casebook' Dr Feelgood was made into a limited documentary series on the REELZ channel. The book is being turned into a major limited television series.Lon Davis is a noted film scholar whose books include biographies on Film star Francis X Bushman (including an upcoming film documentary) and Chase: The Story of the Keystone Cops, Silent Lives and Stooges Aming Us. He is also a highly acclaimed book editor. Lon and his wife, Debra Davis live in Oregon.