A Guide to the Guide (Hardcover) 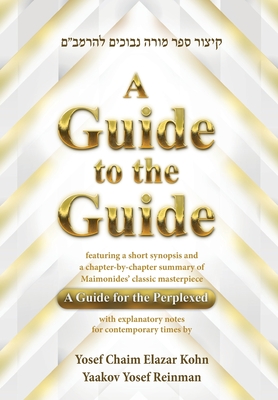 A Guide to the Guide (Hardcover)

A Guide to the Guide is an annotated summary of the classic Moreh Nevuchim, known in English as A Guide for the Perplexed, one of the greatest philosophical works of the medieval period. The author, Moses Maimonides, the Rambam, is a towering figures of Jewish history and scholarship. Born in Spain in the twelfth century, he spent most of his life in Morocco and Egypt. He wrote this book for intelligent young people discovering the world of philosophy. While his system is based on classic Jewish writings, Maimonides quotes Aristotle exhaustively and contrasts Greek and Muslim philosophy. Not surprisingly, the publication of this book triggered a storm of rabbinic controversy.

The author addresses a wide range of topics, such as creation vs. an ancient universe, divine attributes, divine unity, providence, prophecy and angels, as well as anthropomorphism in the Bible and other issues of Torah interpretation.

The last part of the book is an explanation of the commandments of the Torah and their rationales. The author describes pagan rites recorded in the ancient texts The Book of Tom Tom and The Nabatean Agriculture and points out that numerous commandments counteract them.

Although there is a great deal of curiosity about A Guide for the Perplexed, it is a dense and complicated book, practically inaccessible to the average intelligent reader. A Guide to the Guide makes this book easily accessible. It is not a translation but rather a chapter-by-chapter summary written in easily understood modern English. It is also fully annotated with many illuminating insights and parallels to contemporary science and technology. If any chapter captures the reader's particular interest, he can go to a translation and plow through the original chapter in its entirety.

This work is the product of a five-year collaboration between Yaakov Yosef Reinman, a Talmudist, historian and novelist, author of the twelve-volume Strasbourg Saga under the name Avner Gold, and Yosef Chaim Kohn, a medical doctor, scientist and mathematician.