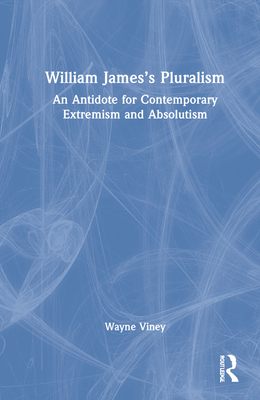 William James's Pluralism: An Antidote for Contemporary Extremism and Absolutism explores extremism and the related problem of absolutism in the context of the psychology and philosophy of William James.

Extremist and absolutist views were topical in James's day, especially around the time of the Civil War, but they are no less common in these early years of the 21st century. James argued that the love of singularities such as belief in one God, one method, one political system, or one value system contributes to extremist, even violent mentalities. In this book, James's views on singular versus pluralistic perspectives are explored and then applied to contemporary practical issues such as abortion, birth control, and death with dignity legislation. These perspectives are furthermore applied to more theoretical issues, such as causality, values, and methods or ways of investigating the world. Within William James's Pluralism, these theories are investigated in a comprehensive philosophical and psychological examination of the human experience.

Written in a nontechnical manner to appeal to the general public-just as William James hoped for his pluralistic philosophy-this book is additionally of considerable interest to academics and students across many fields such as psychology, philosophy, history, and sociology.