An American Woman in Kuwait (Paperback) 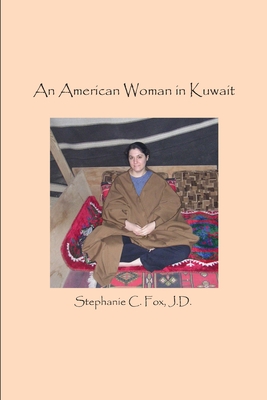 An American Woman in Kuwait (Paperback)

An American Woman in Kuwait is a travelogue written by an American lawyer who accompanied her husband, a Ph.D. immunologist, to Kuwait. The trip spanned almost six months, during the cooler parts of the year, from November 2004 to May 2005.

In an account that is academic rather than light armchair reading, Stephanie C. Fox strips away the veneer of modern technology to explore features of the nation not widely known or appreciated by the public worldwide. A major focus of her work is the degree to which the traditions and prejudices of the tribes from which Kuwaitis claim ancestry act to maintain an inferior status for women.

Outwardly, Kuwait appears enlightened with respect to issues of women's rights. The rigid dress codes and other restrictive laws regulating the behavior of women in Saudi Arabia are absent. Many Kuwaiti women hold prestigious and high profile positions, particularly in academia. Inwardly, many of these same Kuwaiti women live their private lives much as they have for centuries, entirely available to their husbands while at home.

While in Kuwait, the author lived among Kuwaitis, ate traditional foods, mingled with Kuwaitis, studied Kuwaiti history, visited most of its museums, and spent a weekend with her husband at the Wafra Farms Oasis. She was even lucky enough to meet Kuwait's most famous woman suffragist, Rola A. Al-Dashti, Ph.D., who later became a member of the country's National Assembly.

The author, armed with a digital camera and a laptop, recorded everything she saw, heard, tasted, smelled, and touched. Keeping a detailed journal of her experiences led to a book full of photographs that catalogues various aspects of Kuwaiti life and history. At the back of the book are a glossary of Arabic words with a bibliography of the books and articles she read while in Kuwait.