The York Cat Crime Trilogy: The Case of the Clementhorpe Killer, The Cat Who Knew Too Much, The Call of the Cat Basket (Paperback) 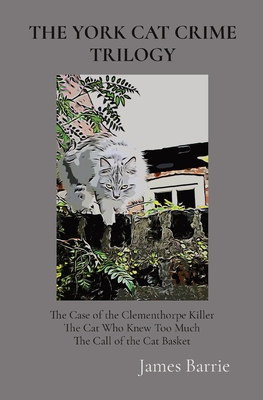 The York Cat Crime Trilogy: The Case of the Clementhorpe Killer, The Cat Who Knew Too Much, The Call of the Cat Basket (Paperback)

The Case of the Clementhorpe Killer

When Theodore discovers his neighbour, pigeon-fancier Peter Morris with his head bashed in, he sets out on the trail of the Clementhorpe Killer.

Set among the back alleys of York, this is murder mystery with a feline twist. It is Theodore's first foray into crime detection.

The Cat Who Knew Too Much

After Theodore moves to the York suburb of Acomb with his owners, there is soon a murder in the house behind but only Theodore knows there is a killer in the suburban midst. How is he to prove it and make sure that the justice is served?

With many references to classic Hitchcock films, this is a comic romp through the leafy suburbs, leaving many a bloody footprint (and pawprint) on the well-trimmed lawns.

The Call of the Cat Basket

Theodore, our reluctant cat detective, goes after escaped convict Milton Macavity. It is Bonfire Night and protestors have descended on York in their thousands. The pursuit takes Theodore into the crowded city centre.

Will Theodore be able to stop Bonfire Night ending with a bang and return to the comfort of his home and his rather vocal cat basket?