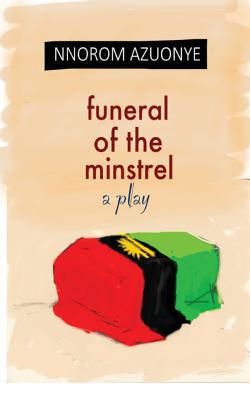 
Usually Ships in 1-5 Days
(This book cannot be returned.)
Born in the Republic of Biafra on October 1, 1960, poet, playwright and actor Dr Esiaba Irobi, the Minstrel, lived in exile in Nigeria, United Kingdom, United States and Germany where he is said to have died, in Berlin, on the 3rd of May, 2010. It is his funeral. The Minstrel, however, as the funeral guests discover, is not the kind of guy that sleeps silently in a box. Esiaba Irobi is Esiaba Irobi. "Nnorom Azuonye has written a remarkable play that allows Esiaba Irobi's charismatic electricity to crackle from beyond the veil...capturing his speech, his brawling irreverence, diamond sharp intelligence and ability to lob the most un-p.c. hand grenades filled with intellectual explosives from the most unexpected of angles... This is a play that must be seen." - Andy Willoughby Senior Lecturer in Creative Writing, Teesside University. "...How do you mourn an avatar? Tears are never enough. After the songs and dirges, the ache remains... Esiaba Irobi was such an avatar. He came, shone, glittered for a brief incandescent moment, and then was gone...In this short play which Nnorom Azuonye has structured as a rite of mourning enacted by Esiaba's peers and former students, he invokes the late writer's anger and irreverence, his crusade against corruption and mediocre leadership, as well as his irrepressible love of grandiloquence. ...Nnorom shows that, always underlying Esiaba's creative passion was a profound humaneness, and a sublime vision of perfection and loveliness...every time the play is performed, Esiaba himself, the 'rambunctious songmaster' and 'intellectual terrorist'...will probably rise, as the play envisages, and join in the dance." - FEMI OSOFISAN Author of 'The Oriki of a Grasshopper & Other Plays' Poet, Playwright, Publisher and Preacher Nnorom Azuonye studied Dramatic Arts at the University of Nigeria, Nsukka, where he distinguished himself professionally and academically winning the departmental Best Graduating Student Prize for 1989/90 session. A versatile theatre artist, he has directed Maama by Kwesi Kay and designed the set for Ebrahim Hussein's Kinjeketile. His numerous stage roles include Sergeant in Femi Osofisan's Once Upon Four Robbers, Forest Head in Wole Soyinka's A Dance of the Forests, Dr Innocent Egbunike in Nnamdi Ndu's Scars the Mar and Chief Isokipiri Erekosima in Esiaba Irobi's Hangmen Also Die. In 1990 Nnorom's play; A Tasty Taboo was performed at the University of Nigeria Arts Theatre and in 1994, his short play; Return of the Businessman was translated into Igbo language and broadcast on DITV Kaduna. In 2003 he co-wrote the screenplay for Echoes of War - an Obi Emelonye film. Author of Letter to God & Other Poems (2003), The Bridge Selection: Poems for the Road (2005/2012) and We Need God in Nigeria Again (2014), Nnorom lives in London with his wife Thelma Amaka (nee Mbomi), sons Arinze Chinedum and Obinna Chiemelie, and daughter Nwachi Ola. Front cover design by Olu Oguibe Cover Image: Olu Oguibe 'Untitled' 2010.