George Weah The Dream, The Legend, The Rise to Power: The Journey of an Enigmatic Leader (Paperback) 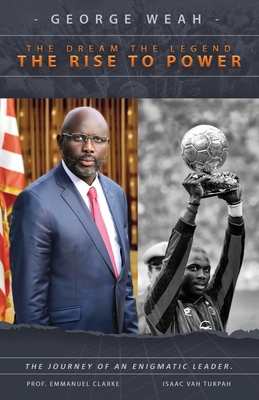 George Weah The Dream, The Legend, The Rise to Power: The Journey of an Enigmatic Leader (Paperback)

"The long-anticipated and befitting book on former FIFA World Best Player of the Year and Ballon d'Or winner is here." Complete Sports, Nigeria No.1 Sports Daily.

With more than 180 people interviewed, the book takes the reader on an exhilarating expedition with George Weah through the Ghetto of Gibraltar as he tries to find himself as a lost youth, and as he deals with everyday life's events within his Clara Town Community. George Weah: The Dream, The Legend, The Rise to Power reveals how George overcame the pains of rejections, and the negative stereotype of people born and raised in the ghetto. Weah used his football talents as a vehicle to get out of poverty. With fame and money, he morphed into someone different - a philanthropist, a man with a hunter and gatherer-mindset, a flawed man, and women's magnet. The reader will encounter Mr. Weah's many personality traits. They include, dealing with politicians, friends, women, and managing his personal finance.

In George Weah: The Dream, The Legend, The Rise to Power, the reader will meet George Weah within his element as he creates friendship and burns bridges with friends, allies, and supporters. It will take the reader down many rabbit holes, and into many alleyways on George Weah's journey into politics. It unveils his many successes as a football player, and his weaknesses as an imperfect man and the leader of a youthful generation. While George Weah's story is still being written, the book captures a good significant number of events in the life of Weah as a person and as an elected president of Liberia.