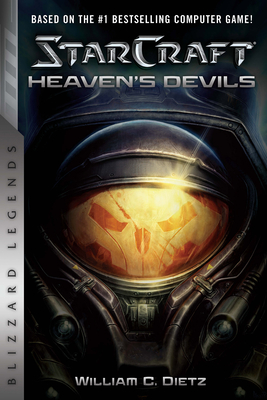 
Usually Ships in 1-5 Days
For the poor, hardworking citizens of the Confederacy's fringe worlds, the Guild Wars have exacted a huge toll. Swayed by the promise of financial rewards, a new batch of recruits joins the fight alongside a slew of mysteriously docile criminals; and a few dubious military leaders. Eighteen-year-old Jim Raynor, full of testosterone and eager to make things right at home, ships off to boot camp and finds his footing on the battlefield, but he soon discovers that the official mission is not what he's really fighting for. For the first time ever, StarCraft enthusiasts will learn the origins of the enduring friendship between the young upstart Jim Raynor and the streetwise soldier Tychus Findlay. Watch as they battle on the front lines of a fierce interplanetary war and bear witness to the Confederacy's rank corruption; corruption so reprehensible that it rains immeasurable death and destruction upon the government's own people.
New York Times bestselling author William C. Dietz has published more than fifty novels some of which have been translated into German, French, Russian, Korean and Japanese. Dietz also wrote the script for the Legion of the Damned game (i-Phone, i-Touch, & i-Pad) based on his book of the same name--and co-wrote SONY's Resistance: Burning Skies game for the PS Vita. Dietz grew up in the Seattle area, spent time with the Navy and Marine Corps as a medic, graduated from the University of Washington, lived in Africa for half a year, and has traveled to six continents. Dietz has been employed as a surgical technician, college instructor, news writer, television producer and Director of Public Relations and Marketing for an international telephone company. Dietz is a member of the Writer's Guild and the International Association of Media Tie-In Writers. He and his wife live near Gig Harbor Washington where they enjoy traveling, kayaking, and reading books. For more information about William C. Dietz and his work visit: williamcdietz.com