Anatomical Theater (In the Grip of Strange Thoughts) (Paperback) 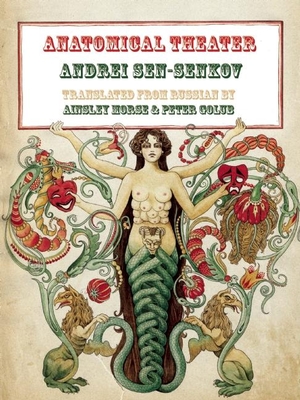 Anatomical Theater (In the Grip of Strange Thoughts) (Paperback)

Few of Andrei Sen-Senkov's patients and colleagues know of his status as one of Russia's better-known contemporary poets, but he doesn't lose much sleep over this. Indeed, in person Sen-Senkov exhibits none of the pathos of the Inspired Lyricist. He is just as likely to complain about the weather, bemoan the latest political or natural disaster, or exclaim breathlessly over a newly discovered jazz musician as he is to discuss poetry. And when you read his poems, it all makes sense: for Sen-Senkov, anything can be poetry, everything is poetry.

Born in 1968 in Dushanbe (now capital of Tajikistan), Sen-Senkov moved to central Russia following the break-up of the Soviet Union. He moved to Moscow in the beginning of the 2000s and joined the city's lively literary scene, although he works primarily as a gynecologist. His involvement in literary life has been as eclectic and wide-ranging as his choice of subjects: a tireless advocate of artistic innovation, Sen-Senkov participates in events devoted to visual poetry, sound poetry, video poetry, and other multidisciplinary endeavors, as well as traditional poetry readings.

Sen-Senkov's poetry comes across easily and well in translation. Some of his imaginative leaps are more obscure than others, but this only increases the pleasure gained from following them. As a poet he is anti-hermetic--he writes to be understood, and he is generous in sharing his observations. Translators and English-language readers alike can delight in the fact that the intuitive logic of his imagination essentially transcends linguistic boundaries.

Andrei Sen-Senkov: He is the author of five books of poetry, prose and visual poems. He is a regular participant in Moscow literary festivals, performing free verse and short prose. In 1998 he was an award-winner at the Turgenev Festival for Short Prose, and in 2006, 2008 was shortlisted for the Andrei Bely Award.Peter Golub: Peter Golub is a Moscow-born poet and translator. He has published original work and translations in various journals, including ARC Poetry, Cimarron, and World Literature Today. In 2008 he edited an anthology of contemporary Russian poetry, which was published by Jacket magazine. In 2007 a bilingual edition of his poems, My Imagined Funeral, was published by Argo-Risk Press in Moscow. He is currently a translation consultant for the St. Petersburg Review, and is pursuing his PhD at Columbia University. He is the recipient of a PEN Translation Grant for a collection of flash fiction by Linor Goralik and a BILTC Fellowship for the poems of Andrei Sen-Senkov.